At long last, the Heckler & Koch G36 is coming to America — albeit in rimfire form. This HK-licensed, Walther-manufactured tactical plinker was announced at the top of the year and is now shipping to stores near you.

Patterned off the ’90s-era German assault rifle, this rimfire rifle has the look and feel of the G36, including the ambidextrous controls and over-bore charging handle, with the standout exception being that it’s chambered for .22 Long Rifle. 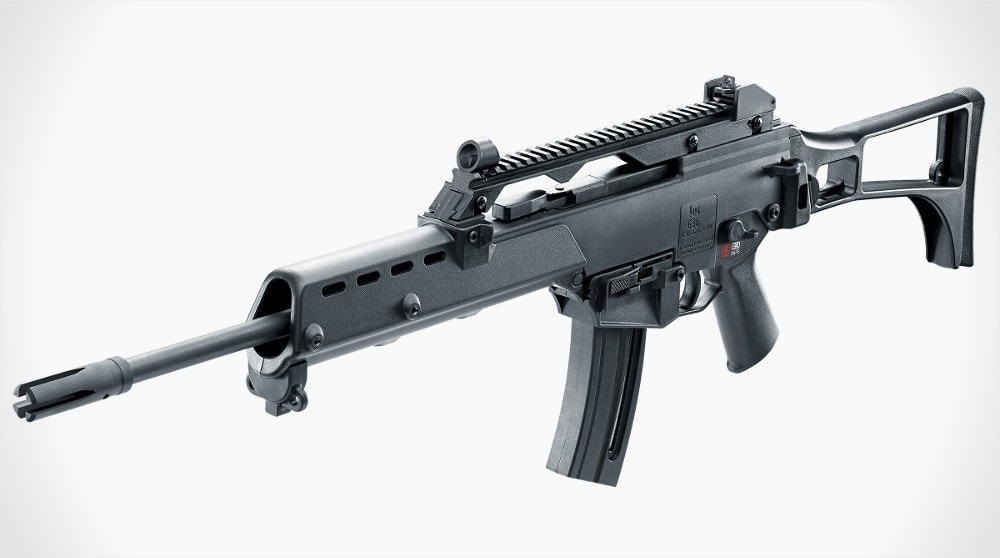 The G36 Rimfire with a standard 20-round magazine. The magazines have knobs on the followers to make loading fast and easy. (Photo: Walther)

While there has long been talk of importing to or manufacturing G36 rifles in the U.S. this joint effort by HK and Walther is the one of the easiest and most affordable ways to get behind a G36, if just by name.

Sure, it’s not chambered for 5.56 NATO but that’s going to make it even more appealing to some shooters. To be sure, rimfire ammunition is still a bear to find in places, but with a little vigilance it turns up in stores and online.

The fact that this is a rimfire rifle means that it is priced much more affordably, with vendors already listing it in the $500 to $550 range. And that’s while the G36 Rimfire is still new and in more demand — down the line it will probably list for less.

The G36 Rimfire is lighter in weight than the real centerfire rifle at just 6 pounds, 12 ounces unloaded with the magazine. It has a similar barrel length at 18 inches and is threaded for common 1/2-28 muzzle devices.

It features fixed front and rear sights on top of carrying handle and the sights are the right height to work well with a low-profile red dot sight. The rear sight is adjustable for both windage and elevation. The carrying handle doubles as a guard against the reciprocating charging handle.

You can see that the stock is open to let spent cases eject straight out with the stock folded. (Photo: Walther)

The G36 Rimfire takes down similarly to the real thing and has a folding buttstock. The skeletonized stock doesn’t interfere with ejection and the G36 Rimfire can be fired with the stock folded.

Tactical plinking is the new hotness and this is a very attractive package at a good price. Lightweight and affordable, the G36 Rimfire is suited for light training, carrying as a kit rifle and just having fun at the range.