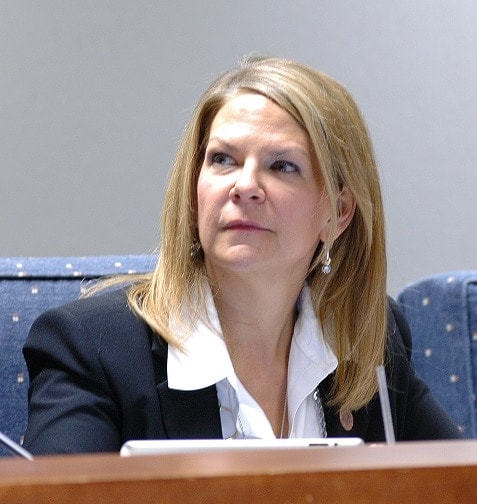 Arizona State Sen. Kelli Ward wants to strike a ban on many Title II items in the state (Photo: KNAU)

State senators in Arizona this week gave their initial endorsement to a plan to strike mandates on many regulated weapons to include suppressors and short-barreled shotguns rifles and shotguns.

The move came as a last-minute floor amendment to a bill changing state law on the restoration of gun rights following fulfillment of court order punishment in certain criminal cases. It was granted preliminary approval on a voice vote.

“My own view,” said Sen. Kelli Ward, R-Lake Havasu City, the measure’s sponsor, “is we have the right to keep and bear arms, and really, that right shouldn’t be infringed. The government putting any kind of regulations on that is wrong.”

The amendment to Senate Bill 1460 would grant a person who has had their firearms rights restored the right to carry a short barreled rifle or shotgun whose barrel length was less than 16 or 18 inches respectively, or a suppressor/silencer device, or martial arts weapons commonly called nunchuks.

Ward advised on social media that she proposed the amendment following a suggestion from a constituent, a Baptist minister, who sought legal possession of nunchuks.

It’s unclear whether the wording of Ward’s amendment could be interpreted as an attempt to supersede federal gun laws. Under the National Firearms Act of 1934, short barreled rifles and shotguns as well as suppressors were classified as Title II weapons, making them liable for registration with the Bureau of Alcohol, Tobacco, Firearms and Explosives, who assess a special tax on the items.

Arizona already has very liberal NFA laws and is considered, by industry experts Guns.com spoke with, to be a model state in many regards to ownership of these federally regulated items. According to data maintained by the ATF, Arizona residents and entities have over 123,000 NFA items registered to include 21,382 suppressors, 7,162 short barreled rifles, and 1,951 short barreled shotguns as of March 2014.

In fact, the state is just one of six that has far-reaching “shall-certify” laws on the books that mandate local law enforcement chiefs sign off on ATF forms to apply for NFA items.

Guns.com reached out to Sen. Ward with questions on her ideas behind the amendment but have not received additional comment.

She did elaborate to the Arizona Republic, Tuesday saying, “As I said in the floor, this was suggested by a constituent. The amendment allows law-abiding citizens to have access to some things that are currently prohibited. Criminals don’t care if these are legal or illegal – if they want them, they get them. Why should law-abiding citizens be limited? State sovereignty is a priority for the people in my district.”

Regardless of the scope of the legislation, members of the state Senate are already planning to oppose the amendment.

Sen. Steve Farley, D-Tucson, stated the additional language should have been added in committee where law enforcement and others could have commented rather than in a voice amendment.

“It is only going to further our reputation on The Daily Show here in Arizona that we couldn’t find a way of banning driving while texting while at the same time making legal silencers, sawed-off shotguns and nunchucks,” said Farley.

The editorial board of the Arizona Republic echoed these feelings Tuesday, blasting both Ward and her legislation.

Republican Sen. John Kavanagh, a former police officer, advised that the language addressing weapons reclassification would likely be stripped from the bill before reaching the state House.

The Arizona legislation now proceeds to the Senate as a whole for consideration.