County prosecutor: Charges dropped 'in the interest of justice' against NJ man with antique gun 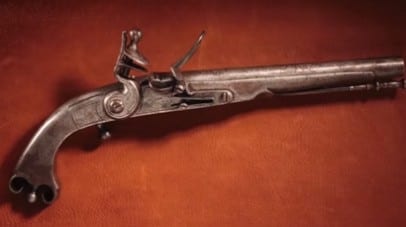 The gun was part of the man’s collection of 18th-century antiques.

A retired teacher in Cumberland County, New Jersey, who was facing a minimum of 10 years in prison for a felony gun charge over a 300-year-old flintlock pistol has had the charges against him dropped, the county prosecutor announced Wednesday.

Police discovered 72-year-old Gordon Van Gilder had an antique gun wrapped in a cloth and tucked away in the glove box of his car when he was stopped for a minor traffic violation in November. The officer sent Van Gilder on his way, but the following day authorities showed up at his home with a warrant for his arrest because he did not have the proper paperwork for the antique gun.

Van Gilder was at risk of losing his retirement plan, which he had spent more than 30 years earning, if convicted.

But Van Gilder’s attorney, Evan Nappen, who specializes in gun cases and successfully represented Shaneen Allen, a single mother of two with a concealed carry permit who was facing similar charges after being pulled over in New Jersey last year, argued that the mid-1700s flintlock didn’t even fall under the legal definition of a firearm. But Cumberland County Prosecutor Jennifer Webb-McCrae said in a statement, “The public should be forewarned about the prescriptions against possessing a firearm (even an antique) in a vehicle.

Nonetheless, after reviewing Van Gilder’s case, Webb-McCrae used her power of prosecutorial discretion to drop the charges against Van Gilder “in the interest of justice.”

Nappen said he and his client are pleased with Webb-McCrae’s decision, commended her actions, and said he believes she used her position in a wise manner.

“We’re glad that the mater has been resolved,” Nappen added, and also said he hopes the incident will highlight the need for antique firearms to be clearly excluded from the state law.