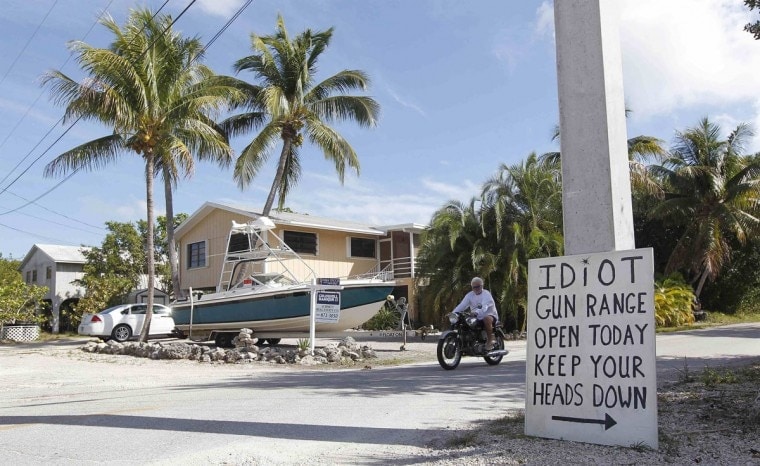 A sign set up on Big Pine Key by angry neighbors warning of Doug Varrieur’s backyard gun range in 2014 before he dismantled it. (Photo: Andrew Innerarity/Reuters)

A state Democrat is actively pursuing a proposal to expand regulations on makeshift private shooting ranges in the Sunshine State after a series of high profile events in the past year.

While the planned measure does not move to prohibit ranges on private land altogether, it does seek to place a number of restrictions on how they are set up.

“This will protect residents from the unintended consequences of homemade gun ranges,” State Rep. Darryl Rouson, D-St. Petersburg, said in a post on his social media account. “The bill removes the words ‘reckless and negligent’ from the previous law and prohibits the discharge of guns in residential areas, except in situations where self-defense is necessary or ‘Stand Your Ground’ may apply. I believe in the 2nd amendment right that all citizens have to bear arms, but I am also adamant about the safety of our children and families.”

Rouson’s measure, House Bill 623, makes it a crime to discharge a firearm on any property used primarily as the site of a dwelling or zoned exclusively for residential use. As such, private shooting and hunting clubs would remain exempt as long as they are not in residential areas, as would camps. It would also not apply to a person lawfully defending life or property.

The move comes after two high profile backyard ranges – the first in Big Pine Key set up by Doug Varrieur, and a second in St. Petersburg built by Joey Carannante – in the past year gained national media attention and a public outcry from neighbors.

Both men have since torn their respective ranges down and Varrieur, who appeared in what could be termed an anti-gun parody piece on Comedy Central’s Colbert Report, is supporting Rouson’s measure.

Varrieur told the Florida Keys Reporter this week that, “an unclear law may now finally be made clear for the citizenry of Florida and law enforcement,” Varrieur said. “I will work hard for Representative Darryl Rouson to see this bill succeed and bring sanity back to this statute.”

Second amendment advocates in the state feel that instead of pursuing new legislation, local governments should enforce the laws that are already on the books.

“The legislature addressed this issue in 2012 specifically to stop people from putting up shooting ranges and discharging firearms in dense residential neighborhoods. Because some local governments are refusing to enforce current state law is not justification to change the law,” Marion Hammer, president of the Unified Sportsmen of Florida and past president of the National Rifle Association, told Guns.com

“Throwing up some boards and sand in your yard doesn’t make it a range. So-called makeshift shooting ranges don’t belong in dense residential neighborhoods and in fact, nothing in the law allows them,” said Hammer.

Rouson’s measure has been referred to House Criminal Justice Subcommittee. If signed into law it would take effect Oct. 1.