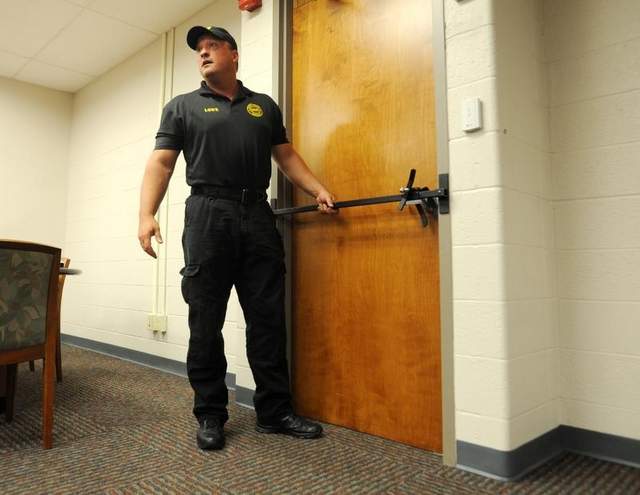 An Ohio school district was recently prohibited by state officials from using a new $30,000 barricade system purchased through parent fundraisers.

The news came from the Board of Building Appeals within the Ohio Department of Commerce who advised the Southwest Licking School District that the devices, which secure doors against unauthorized entry to classes in an emergency, violate state building codes.

“It’s beyond comprehension to know that we could have added an additional layer of protection for our kids in the event of an active shooter,” parent organizer Erin West told the Columbus Dispatch. “And that our great community and great schools and great fire and sheriff’s offices came together to make that happen, at no expense to the schools, only to be told we can’t use them – it’s sickening.”

West and others held coin drives, sought public sponsors and held other fundraisers to purchase 307 portable Barracuda intruder-defense systems to cover every door in the school district. Now, it could all be for nothing.

The devices received a thumbs down from the Licking County Building Code Department last month, which was upheld by the Board of Building Appeals last week, as they violated state fire codes. Building inspectors further advanced concerns that students could use a barricade to trap and assault a teacher or rape a student.

School officials are similarly baffled by the fact that recent ALICE or Alert, Lockdown, Inform, Counter, Evacuate training received by the district specifically calls for those who cannot safely evacuate during an active shooter event to barricade a room until help arrives.

“We were told we’re not allowed to use the devices,” said Southwest Licking Superintendent Robert Jennell. “We’re not allowed to barricade our doors. That’s basically just short of telling us ‘Don’t follow the advice outlined in active shooter training.’”

State Sen. Jay Hottinger is seeking to schedule another meeting to look at the issue.