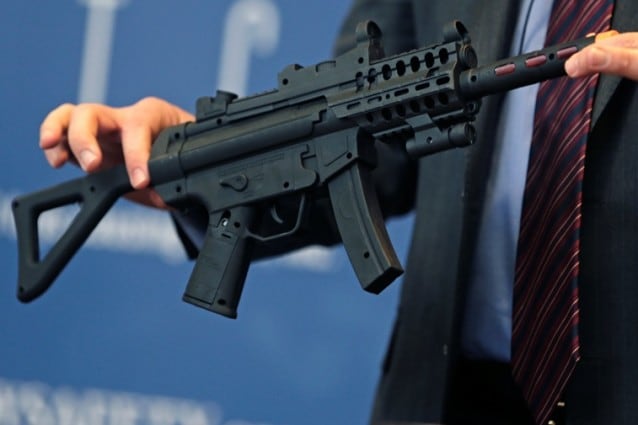 I often wonder what’s going through the minds of people when police respond and make contact with them.  The truth is, police respond to calls.  Occasionally cops notice criminal activity while patrolling, but mostly we respond because someone called the police.

“I just saw two men running around the neighbor, hiding in the shadows. They have guns.”

With only that information to go on, police pull up, gain a tactical position and come out ready to expect the worst… a gunfight.  And why shouldn’t they?  What would you expect?

In theory, when uniformed officers point guns at a person and holler, “Police, drop the gun!” a reasonable person will comply.  That is often not the case, because not everybody acts reasonably, and when officers feel their life is in jeopardy because a person is pointing a gun at them–be it the kind that shoot lead or plastic–who can blame them for pulling the trigger?  It’s not like you can tell the difference between a realistic-looking Airsoft gun and a real gun when your life is on the line.

Officers don’t hesitate because officers can’t hesitate.  It’s not like the movies where cops and civilians point guns at each other and talk about it.  That’s not safe for the officers and doing it will get you killed.

But Airsoft guns have orange pointed muzzles, some say.  Yeah, right.  In anything resembling a stressful situation, officers won’t be able to tell the difference. (And it’s supremely stupid to paint those orange muzzles black.  In fact, some legislatures want to make it illegal to own or to paint a muzzle black.)

My first encounter with teenagers with Airsoft guns was at dusk 15 years ago.  What I saw was guns.  I pointed my gun at them and they complied.  Only after they put the guns down and I walked up to them and inspected the guns up close could I tell they were Airsoft.

Even in the light, it would be difficult to see any bright orange muzzle.  Besides, if that worked, criminals would just paint the muzzles of real guns orange to trick police–which they have in the past.

And now add this to equation–I now see on the job a lot of felons who aren’t allowed to carry guns, carrying realistic looking Airsoft or Airsoft-type guns.  It’s not like I can tell the difference until I’m handling the gun, but that’s exactly what they’re banking on in their criminal world.

Until I feel that I can definitively tell the difference, I’m going to protect my life and assume any gun pointed at me is real.

In the most recent case, a guy beat up his wife and then took off running from police after they saw him with a realistic-looking AR-15.  The guy even eluded officers by car.  Because police chase policies are not common anymore, officers didn’t chase him. They found him a little later outside of his car.

Again, when confronted by police, the guy failed to comply multiple times to lawful police orders.  Finally, the guy ran to his car and grabbed his rifle trying to point it at officer.  Police shot and killed him.  Only later did they realize the gun wasn’t real (though real may be the wrong word here and, in truth, an airsoft gun could permanently blind a person).

I often wonder in these cases, and I don’t think I’m alone in thinking this by a long shot, if criminals just want to get shot by police–the proverbial suicide by cop.  To me, that’s cowardice and fundamentally stupid, but maybe they don’t care.  Maybe these people just want to die.

But if that’s the case, what an awful burden to put onto other human beings i.e. the responding officers.  No one wants to shoot and kill someone, and this horrible event can become even more psychologically complicated when the person really had an Airsoft gun.

I don’t blame officers who pull the trigger in these situations.  If they hesitate, they could die and tactically speaking, it’s not smart to wait to find out if a gun that looks real is real.  But tell them that.

I am confident, however, that if people didn’t aim guns at police—real guns or Airsoft guns—they wouldn’t get shot by police. I like what one sheriff in Florida said recently.  He said, “There’s nothing politically correct about a gun fight… If you pull a gun on us…you can guarantee we’re going to shoot you.”