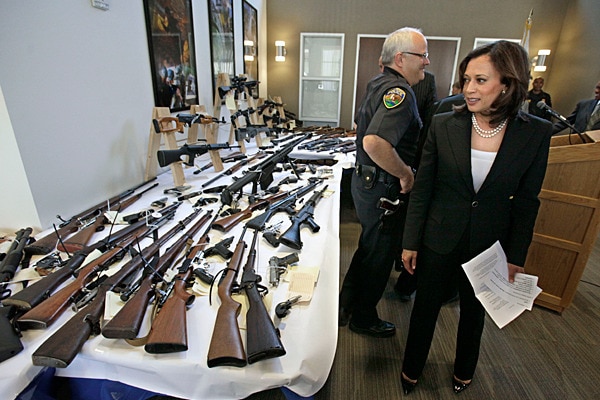 California Attorney General Kamala Harris looked over some of the guns seized from individuals legally barred from possessing them following a news conference in Sacramento, Calif., in June 2011. (Photo: Rich Pedroncelli/AP)

A federal judge on Monday found that the dealer’s record of sale fees collected by the state of California, which fund a program to confiscate guns, are constitutional.

Unlike many states, the California Department of Justice as an integral part of every firearm transaction collects a mandatory $19 DROS fee. This fee provides funding for the state’s controversial Armed and Prohibited Persons System, which sends agents to recover once legally owned firearms from those who have been adjudicated no longer eligible to own them by the state.

The suit, Bauer v. California DOJ, challenged if the state can mandate that all law-abiding individuals seeking to exercise their right to acquire firearms should bear the full cost of a “law enforcement scheme designed to ferret out and confiscate firearms from those who unlawfully possess them.”

In short, requiring would-be gun owners to voluntarily chip in to collect other guns from those the state deems no longer able to possess them – a general law enforcement task.

The state argued that the use of DROS money to fund the gun confiscation program was a “common sense connection between the payment of a fee which is used, in part, to ensure that people desiring to possess firearms in California are not legally prohibited from possessing them and the use of that fee to recover firearms from persons who become prohibited from possessing them.”

U.S. District Court Judge Lawrence J. O’Neill, a 2007 appointment to the bench by President George W. Bush, agreed with the state and held that the fee was constitutional.

Citing that the fee is a condition on the sale of firearms in the state, and without paying it an individual cannot proceed with a purchase, it is a regulatory measure and therefore falls outside the historical scope of the Second Amendment. The court then downplayed the fee over its perceived token amount.

“In any event, the DROS fee imposes only a $19.00 fee on firearm transactions,” wrote O’Neill in his 9-page decision. “Under any level of scrutiny, the DROS fee is constitutional because it places only a marginal burden on ‘the core of the Second Amendment.'”

The suit, filed in 2011 with the U.S. District Court for the Eastern District of California, named as plaintiff Herb Bauer, a federal firearms licensee in Fresno as well as four gun purchasers who paid the mandated fees over a five year period. Further, court documents argued that the fee was bordering on an unauthorized tax that was expanded over the years to include funding programs that were never part of the original mandate, even producing a $2 million annual surplus.

Part of this surplus has, since 2013 gone to fund the state’s APPS program. That unit of the DOJ has been increasingly expanded over the past few years as a result of its new revenue stream, hiring 36 additional agents to help process the estimated 40,000 illegally owned guns in the state.

Following that incident, a Bakersfield man expressed disbelief when armed agents came to his door to seize 18 guns when he flagged in the APSS system. The reason for the raid came from a 40-year-old charge for marijuana possession that is no longer even listed in the state’s criminal code. After holding his guns for two weeks, agents returned them once the mistake was realized.

Backed by the National Rifle Association and its state affiliate the California Rifle and Pistol Association, Bauer is led by Chuck Michel, the noted Second Amendment attorney behind the recent Peruta victory.

Michel told Guns.com that the Bauer case has likely not seen its last day in court.

“The trial court blatantly misinterpreted the narrow exceptions to the Second Amendment protections that were confirmed in the Heller case,” Michel told Guns.com. “This is sadly just the latest example of judicial disobedience to the Supreme Court’s mandate. An appeal will be filed this week.”