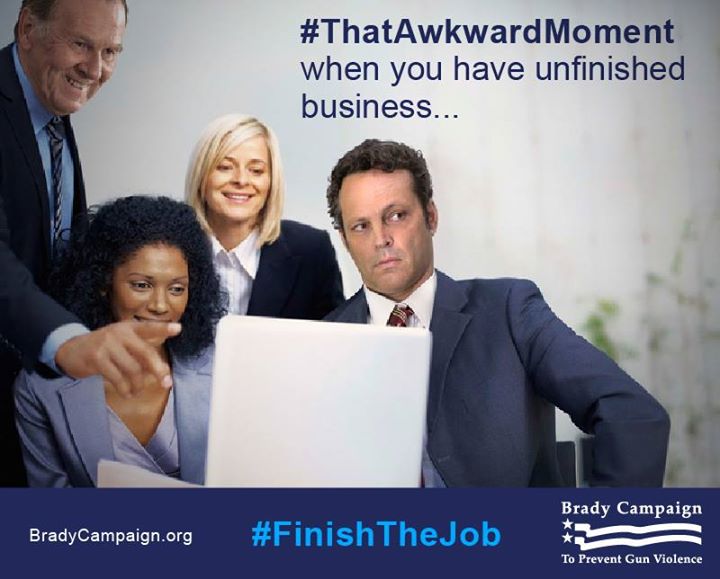 The Brady Campaign is using iStock images of Vince Vaughn in their push to support an expanded background checks initiative. (Photo: Facebook)

A well-known national gun control group is using an image of actor Vince Vaughn, notably outspoken in his feelings on the Second Amendment, to promote their campaign.

The image used by the Brady group comes from a series of Getty iStock compilations released in conjunction with Vaughn’s upcoming film, Unfinished Business, due out this month.

Overlaid with a reference to the gun control organization’s Finish The Job‬ campaign calling for Congress to support expanding background checks to include most private transfers, the Brady group posted the Vaughn image to their social media account Wednesday night.

“In a stroke of PR brilliance aimed at creating social media memes, Vince Vaughn and his Unfinished Business comedy co-stars Tom Wilkinson and Dave Franco have posed for hilarious stock photos and invited anyone to download the images for free on Getty’s iStock site,” Jonathan Hutson with the Brady Campaign advised Guns.com via email Thursday. “The title of the film aligns nicely with the Brady Campaign’s efforts to get Congress to Finish the Job and save lives by expanding Brady background checks to cover all gun sales online or at gun shows.”

Vaughn, in an interview published in Playboy last month, answered candidly on gun ownership. In response to the question, “Do you own a gun?” He answered:

“I do, yeah. I believe in the right to defend yourself if need be. Hopefully you’re never in that situation, but I think you’re fairly naive to believe there will never be a cause for self-defense,” he said.

“But again, I believe it’s up to the individual. I don’t believe rights come in groups. You shouldn’t get more or fewer rights because of what you believe in or what nationality you were born into.”

Guns.com reached out to Mr. Vaughn’s publicist for comment and will update this story as needed.