A first edition, two volume set of “Mein Kampf” signed by Adolf Hitler is going up for auction this month and is expected to sell for at least $35,000, but some think selling the manifesto is in poor taste.

However, Nate Sanders, who owns the auction house and also happens to be Jewish, defended the sale.

“It is a piece of history,” Sanders said. ‘The same people who collect Adolf Hitler (items) collect George Washington, or World War II, or George Patton.”

Sanders said there’s a whole gamut of people who collect items related to Hitler and the Nazi party. In fact, another set of Hitler’s manifesto sold through the same auction house for nearly $65,000 just last week.

The 1930’s edition of “Mein Kampf” is fairly common, as it was often given out as wedding presents during the Nazi regime, but a copy signed by the Fuehrer himself is a bit more rare, according to Sanders.

This particular set was a gift to Philipp Bouhler, the 12th member of the Nazi party, who was responsible for the death of some 70,000 people, including children, who were sick or disabled.

The first volume has the following inscription: “To Herr Philipp Bouhler, in grateful recognition of your loyal work for our movement on the occasion of Christmas 1925, inscribed most sincerely, Adolf Hitler, Munich, December 24, 1925.”

The inscription in the second volume reads: “To Herr Philipp Bouhler, on the occasion of Christmas inscribed most sincerely as a sign of recognition of your performance of duties, Adolf Hitler, Munich, December 24, 1926.” 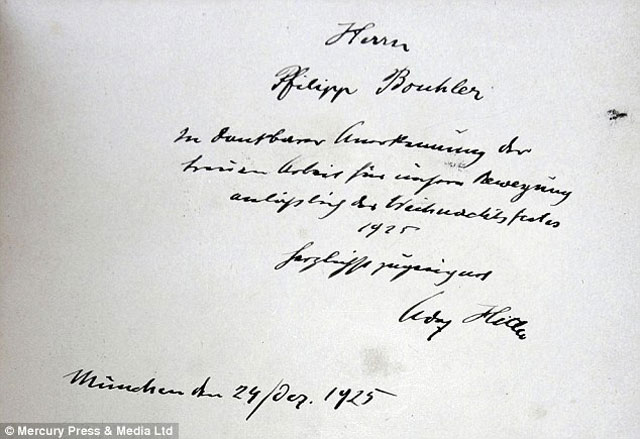 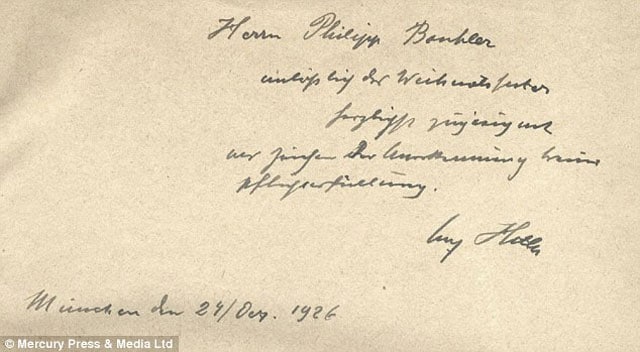 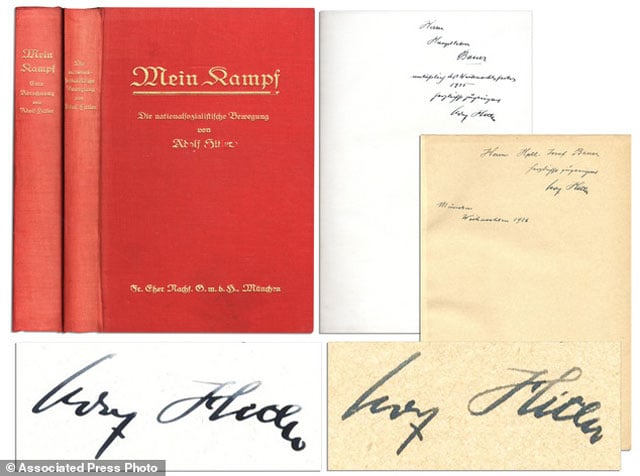