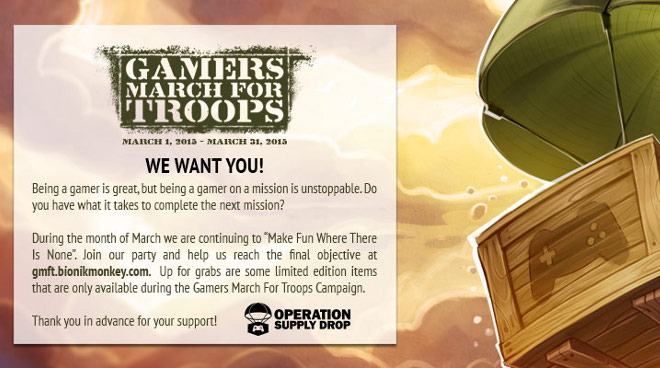 Bionic Monkey and Operation Supply Drop have partnered together for the Gamers March 4 Troops charity drive. From now to March 31, you can help them raise funds to help injured and deployed soldiers abroad.

Operation Supply Drop is a different kind of charity with a very specific goal: to put video games in the hands of very stressed-out soldiers. They raise money and take in video games and consoles to give to troops stationed at forward operating bases and to soldiers and veterans in medical facilities.

OSD’s motto is to “Make fun where there is none” and they’ve been successful since their start in 2010. To-date they’ve raised well over $2 million in monetary donations alone and are looking to set a new milestone for 2015.

It’s a real 21st century type of charity that not only wants to provide for soldiers, they want to raise awareness by connecting their soldiers with gamers everywhere. Case in point, their fundraising goal for this year is no less than $1.337 million. 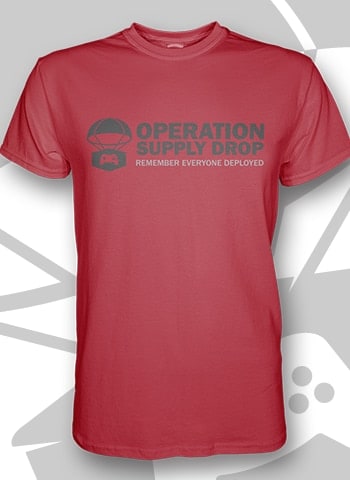 This project ends after March 31 so help out now and get some limited-edition swag. (Photo: OSD)

Bionic Monkey is helping them out with their Gamers March 4 Troops swag bags that run as little as $5 and come with a silicone OSD/GM4T wrist ban to show off your support. Of course there’s a lot more limited-edition gear up for grabs this month in 10 different packages.

They have OSD and “Gaming for Troops” patches for $7 and $8, tactical caps to stick them to for $20 and OSD/GM4T shirts and RED Friday shirts for $25.

The shirts are offered in a wide spread of men’s and ladies’ cuts including crew, V-neck and tank top and the patches are stitched to show your support of the Air Force, Army, Coast Guard, Marines and the Navy, or gamers in all branches.

OSD is keeping tabs on which branch of the military gets the most support, just for bragging rights. They’re still going to continue making “supply drops” to all of their troops regardless of who wins this March.

OSD’s “Ambassadors” are expected to drop in on gaming outlets and popular YouTube channels to spread the word and they’ll of course be at both PAX East and the SXSW expos to spread their message of gaming for troops.