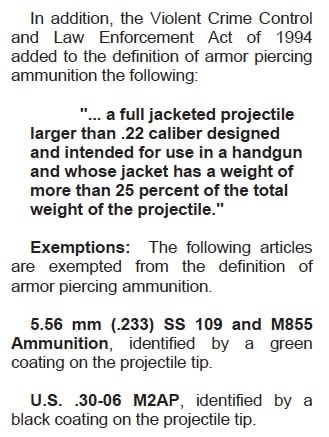 The omitted language under the section about Armor Piercing Ammunition on page 191 of the guide.

The most notable include adding exemptions for 5.56mm SS109 and M855 ammunition.

SS109 bullets and M855 cartridges are on the gun lobby’s endanger species list, so to speak, since a de facto ban could be placed on them if the ATF does not change a certain regulatory policy.

In a 17-page document, the ATF proposed changing the framework for which it exempts armor piercing ammo for sporting purposes. The agency suggests that enacting the changes would give it more flexibility to exempt ammunition based on manufacturers’ intended use and consumers’ actual use. Without an exemption, the agency says the 5.56 ammunition — identified by its green tip — could be banned under federal law.

Green tip ammo has a projectile core that contains steel and there are handguns chambered for it, so it’s considered armor piercing ammunition. While standard issue for the U.S. military, consumers mainly use it for target shooting.

Regulation changes aside, public focus has been entirely on the possible ban. Gun lobbies and lawmakers have been been rallying the public to fight the ban whereas gun control groups have been supporting it.

In an apparent effort to calm the waters, the ATF tweeted, “Nothing to analyze here folks, just a publishing mistake. No AP ammo exemptions revoked” along with a link to the revised document.

First, the ATF involved a missing citation in a section about the transfer and possession of machine guns, the second concerned regulatory changes for radiological equipment, and the last two were grammatical mistakes.

The ATF says it continues to review the guide to ensure no other typographical or editing errors, and asks the public to contact them about other potential errors. For that, contact the ATF at ORA@atf.gov.