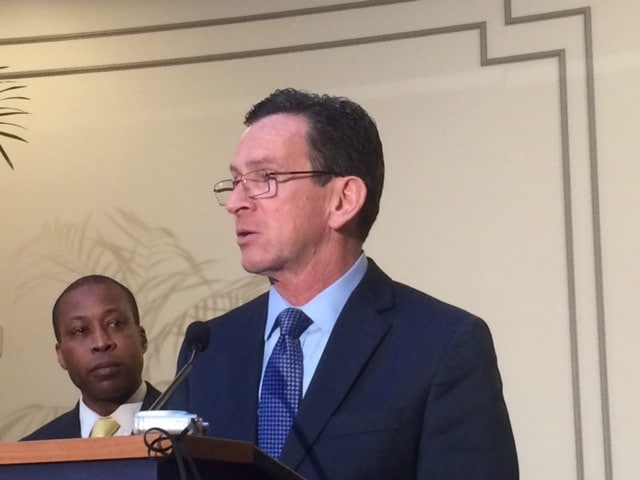 Connecticut Gov. Dannel P. Malloy accepted the findings of the special Sandy Hook Advisory Commission he established, but shied away from its further call for draconian anti-gun measures.

The 16-member commission, established two years ago following the December 2012 Newtown incident in which 20 children and six adults were killed, presented their final report to the governor Friday. The expansive 277-page document includes nearly 100 recommendations on mental health, the physical security of schools and – most controversially – guns.

Malloy, pointing out that the state adopted among the strongest gun control packages in the country during the 2013 legislative session, declined to champion the new recommendations.

“There’s just not a big appetite for even talking about guns at the moment in the state of Connecticut,” he said Friday before accepting the report.

Malloy, who fought a tough re-election campaign in which gun violence and his administration’s response to it, forecasted future school shootings.

“My hope is that we’re doing enough in Connecticut to prevent this from happening again in Connecticut,” said Malloy. “My hunch is that things like this are going to happen in other states and there have been over 1,000 children shot since this time.”

The measures outlined in the commission’s findings directed towards firearms were voluminous.

Besides previous recommendations to prohibit both the sale and possession of any firearm capable of holding 10 rounds or more without the provision to grandfather guns, included in interim reports, the final report calls for any shell casing for ammunition sold in the state have a serial number etched on it for tracing purposes.

“The Commission is deeply concerned about the proliferation, throughout the civilian population, of weapons that were specifically designed for military use during wartime,” read the report. “‘Assault weapons’ like the AR-15, as well as large capacity magazines often used with those weapons, have no legitimate place in the civilian population.”

In the end, the panel held that guns like the AR-15 and magazines that hold 10 or more cartridges levy an unbearable toll on the nation by saying, “The Commission finds that the cost to society of easy civilian access to assault weapons and large capacity magazines vastly outweighs the benefits of civilian ownership.”

Next up on the recommendation list, all firearms should be registered and ammunition buyers would be restricted to only the caliber chambered for their licensed guns and those found in possession of armor piercing or incendiary bullets be subject to a felony. Those who have firearms licenses, stresses the report, should also at every renewal pass a test of firearms handling capacity as well as an understanding of state and local laws.

Finally, the commission’s findings contains recommendations that judges should be given the power to order temporary confiscations of gun, ammunition and carry permits from a person who is the subject of a restraining order. That is where registration and bullet tracing would go hand in hand.

Second Amendment advocates in the state were critical of the final report’s recommendations.

“Banning firearms that can hold over 10 rounds, and forcing law abiding citizens to engage in prohibitively difficult ‘hoop jumping’ just to own a firearm is not the way a person should be treated anywhere,” Scott Wilson, president of the Connecticut Citizens Defense League told the Connecticut Mirror. “The recommendations are abusive in nature to people who wish to have the best means necessary to protect their families from harm.”

The group’s findings are non-binding and are advisory in nature, a fact that its members were well aware of on Friday.

“The commission understands that, absent federal action, we can only go so far,” said Hamden Mayor Scott Jackson, the panel’s chairman.