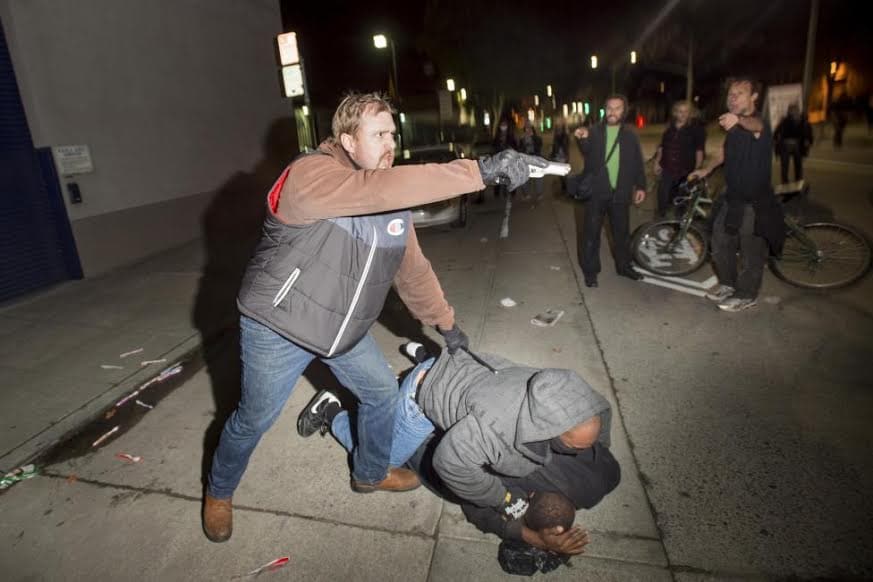 An undercover officer aims his gun at protesters after some in the crowd attacked his partner in Oakland Dec. 10. (Photo: Noah Berger/Reuters)

An internal investigation into the actions of an undercover California Highway Patrol officer who drew his gun during a Dec. 10 anti-police protest in Oakland concluded he acted within department policy.

The officer, who’s identity has not been released, told investigators he drew his gun to protect his partner, who was wrestling with a protestor that hit him, Guns.com previously reported.

“Was it unnerving? Yes. Shocking? Yes,” Avery Browne, chief of the CHP’s Golden Gate Division said in a statement. “We take that seriously when there’s a display of a firearm, but had he not done that, today we might be having a different discussion.

The two officers, both in plain clothes, were monitoring the protestors from their vehicle. When they saw some of the people vandalizing businesses, they decided to follow on foot. The officers were soon discovered when some of the protestors became suspicious of the officers and attempted to remove the handkerchiefs they used to hide their faces.

One of the officers got into a scuffle with a protestor for several minutes and when the crowd began to close in on the pair, the second officer pulled out a baton and then drew his gun to keep others at bay.

Some have criticized the actions of the officers, saying they didn’t show their badges when one pulled out his weapon to announce they were police officers, but investigators concluded last week he was justified in his actions.

Several dozen Bay Area protests broke out during November and December, but that day saw the most brutal two-minute altercation between anti-police protestors and the undercover officers, The Contra Costa Times reported. The protests were in response to police killings in Ferguson, Missouri and New York.