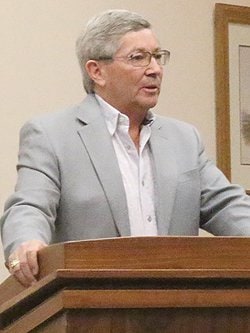 Sen. David Hinkins, R-Orangeville, managed to get his constitutional carry measure through the Utah Senate in good order, and is now halfway to a governor who has pledged to veto it. (Photo: Utah Sun Advocate)

Despite a promise made by lawmakers in the state House to a governor who vetoed similar legislation in 2013, the Utah Senate passed a permitless concealed carry bill by a large measure Monday.

The measure, should it make it into law, would allow those in the Beehive State not prohibited from possessing a firearm to carry a loaded and concealed handgun without a permit. The bill passed in a 21 to 6 vote after being sent to the Senate floor last week on a 4 to 1 committee vote.

“You can carry a gun now anyway,” argued Sen. David Hinkins, R-Orangeville, citing the state’s practice of open carry. “It’s just a matter of whether you can cover it up or not.”

Hinkins’s proposal, SB 256, would allow those 21 years or older and able to possess a firearm under state and federal law, to carry a concealed and loaded handgun. Current state law allows both open and concealed carry, provided the weapon in question is unloaded which is defined by the law as having a live cartridge in the chamber. Hinkins’s measure strikes the “as long as the firearm is not loaded” language.

The practice outlined in the bill, commonly known as constitutional carry, is the law of the land in Vermont, Arizona, Alaska and Wyoming.

This is not the concept’s first brush with Utah lawmakers.

Republican Gov. Gary Herbert in 2013 vetoed a similar measure citing that, “Utah’s permitting system has been in place for decades, and in its current form for more than 15 years. In that time, it has become a national model.”

Earlier this session, state Rep. Curtis Oda, R-Davis County, introduced a constitutional carry bill in February only to voluntarily table the measure after speaking to Herbert.

Constitutional carry bills have been a popular item nationwide with state legislatures this session. Texas, New Hampshire, West Virginia and Kansas have all made progress on measures of their own in recent weeks. Last week, a measure in Maine saw nearly 100 co-sponsors upon its introduction to the state assembly.

The Utah proposal now heads to the Republican-dominated House where a passing vote would place it on Herbert’s desk once again.

However, the governor is promising that lighting can strike twice as far as the legislation is concerned.

“I see no change that has happened … since we vetoed the bill before that would cause us not to veto the bill now,” Herbert said. “I think the laws we have on the books now are working very well. There’s not really any problem out there.”