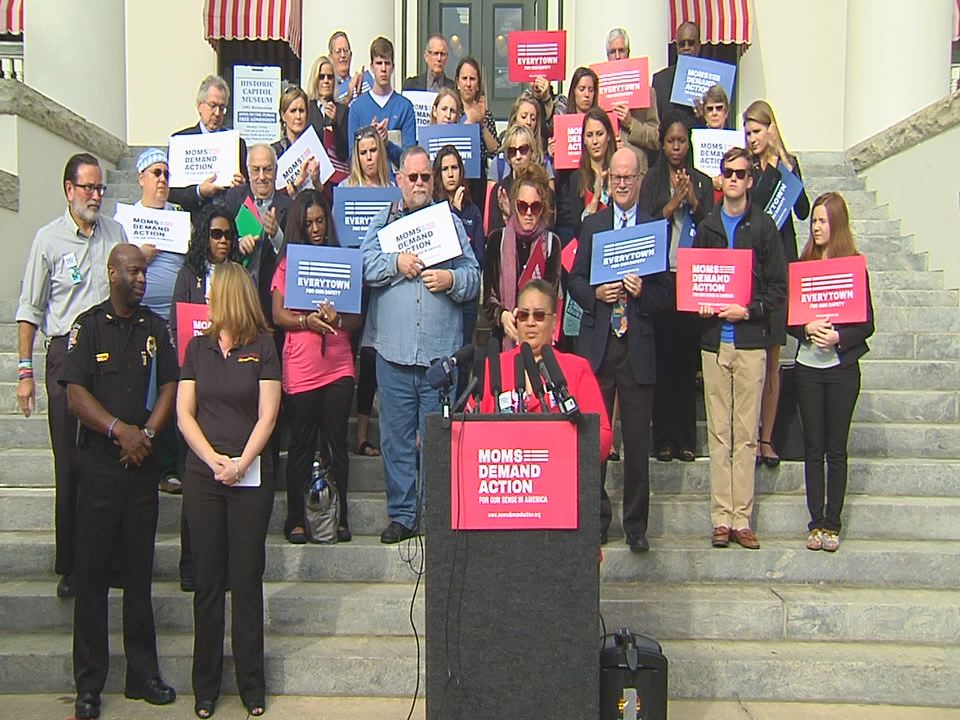 Gun control advocates assembled at the Florida state Capitol in Tallahassee on Monday to deliver 12,000 postcards to legislators calling for “no” votes against pending legislation to allow guns on public school grounds.

The Bloomberg groups were joined by law enforcement lobby groups in their opposition of six bills that, when taken together, would allow lawful concealed carry on public college and university campuses, as well as K-12 schools.

“Those of us charged with keeping campus communities safe know that allowing concealed handguns on campus won’t make students safer, but it will make our jobs harder,” said Terence Calloway, Florida A&M University Chief of Police in a statement. “The only people on campus who should be armed are trained law enforcement officials, like the professionals who responded to the shooting at Florida State in just minutes.”

Calloway is among the opposition that includes the Florida Board of Governors, University Police Chiefs and leadership of all 12 of Florida’s public universities that came out against the proposed increase in gun rights last month.

At the center of the controversy are six bills; HB 4005 and SB 176, which would allow concealed carry on college campuses; HB 19 and SB 180, allowing for selected school safety designees to carry handguns on K-12 school campuses; and HB 251 and SB 754, which would allow those with firearms in school gun free zones to avoid criminal charges if they surrender the weapon.

These measures have been gaining traction through the state legislature with the strong backing of both local and national gun rights organizations to include the National Rifle Association.

Some with the most at stake in the argument about guns on school grounds, are crying foul over the Bloomberg group’s tactics.

Calling the recent Everytown ad campaign and drive in Tallahassee, “absolutely absurd,” the president of Florida Students for Concealed Carry, Erek Culbreath, told Guns.com that the feet on the ground in the state wanting reform are local advocates and students, while many of those opposing it are from out of state.

“They use our school children as props, with the purpose of trying to mislead good people that somehow pre-adolescent children are effected in any way by adults being able to concealed carry while getting higher education,” said Culbreath. “Frankly, it’s insulting and they should be ashamed. It is one thing to argue your point, it is quite another to engage in rather disgusting acts of pathos. But, perhaps it’s not disgusting to them because none of them live in our state.”

As for his organization, which has gained ground following a shooting last November at Florida State University in which one of the three victims shot by a gunman was a concealed carry permit supporter who couldn’t legally carry his gun on campus, Culbreath maintains they are the polar opposite.

“I and all our supporters are native sons and daughters of our state; the state representative who proposed the campus carry bill in Florida is the representative from my county,” said Culbreath. “We all live and vote in Florida. They all live in New York City and are funded by a known activist billionaire.”

As to which side will ultimately win the battle to influence lawmakers in Tallahassee this session, Culbreath was candid in his assessment.

“When it comes to whose opinion matters more, I know the representatives and senators for our state will refer to the voters of our state, who have consistently, and on all levels of government, voted in majorities of pro-gun stance officials,” Culbreath said.