Can soldiers also be Christians? (VIDEO)

I recently took a trip to Pennsylvania.  Thankfully, my chauffeur and close buddy suggested we should drive by Valley Forge after he picked me up from the airport.  I’m glad he did.

Valley Forge sits a little higher than the surrounding area, which gave General Washington and his troops a tactical advantage to stop approaching enemies.  Cannons and muskets were stationed around the area protecting against probable areas of attack.  Fields of fire were calculated and appropriate defilade positions were erected.

Washington brought in the legendary Baron Fredrich von Steuben to teach and discipline the all-volunteer army regarding military formations, rank structure and so forth.

Sadly, many of the troops were so poor that they didn’t have shoes.  Barefoot in the winter and lacking much in the way of decent provisions, including blankets, sickness and cold conditions plagued the nascent army.  The morale must have not been too great to put it mildly.

With all the trauma and emotional burden that comes from war and leadership, George Washington recognized a need for divine help.  The Colonial army was definitely the underdog and in need of miracles to allow them freedom from the oppression of British tyranny. 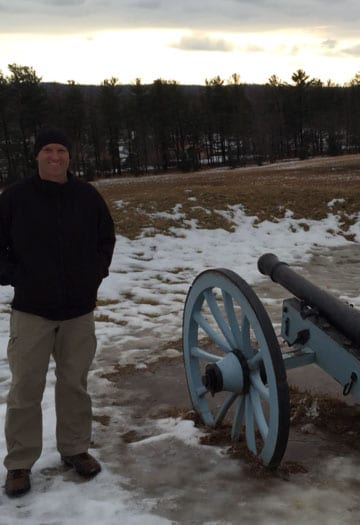 The Commander and Chief directed that divine service would be performed every Sunday at 11 O’clock.  In the Weedon’s Brigade Orderly Book, dated May 2, 1778, was written, “While we are zealously performing the duties of good citizens, and soldiers, we certainly ought not to be inattentive to the higher duties of religion.”

Washington stayed the David Potts’ home there at Valley Forge.  A few years ago while I was searching the national archives on archives.gov, I found a gem worth sharing about Isaac Potts, David’s son.

The Reverend Nathaniel Randolph Snowden wrote down something I think is spectacular in his personal diary.  He quoted a conversation from Isaac Potts who said he saw General George Washington praying.  Perhaps it was this story that led the talented artist Arnold Friburg to paint the picture of Washington kneeling in prayer with a white steed nearby.

According to the Reverend’s diary, Potts said of Washington’s piety, “Such a prayer I never heard from the lips of man.  I left him alone praying.  I went home and told my wife.  I saw a sight and heard today what I never saw or heard before, and just related to her what I had seen and heard and observed.  We never thought a man could be a soldier and a Christian, but if there is one in the world it is Washington. We thought it was the cause of God, and America could prevail.” (spelling and punctuation updated.)

While it may seem like a paradox to be both a soldier and a Christian, there are certainly times when violence needs to be done and when wars can help save lives and allow the blessings of freedom for ourselves and for our posterity.  Besides that, I believe soldiers aren’t held accountable before their Maker for the lawful deeds they’ve done in battle.

In the end, do I believe soldiers and warriors can also be good Christians.  Absolutely.  And we can look to Washington as a great example of that.