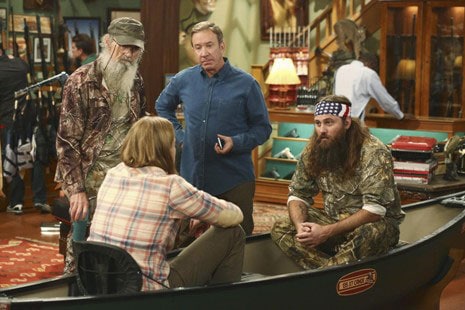 Every now and then, there comes a funny sitcom that remains clean while the rest of Hollywood indulges in trashy one-liners and unrealistic scenarios.  “Last Man Standing” is one of those sitcoms.  But perhaps even more shocking about this show is the pro-gun streak that continues to run through the series.

Now in its fourth season, “Last Man Standing” follows the life of Mike Baxter (played by Tim Allen). Allen’s character is an outspoken conservative businessman who is a partner in the fictional store “Outdoor Man.” He is the face of “Outdoor Man,” and lives out his passion for everything “masculine” and “outdoorsy”at work, but finds himself lost in a house full of women when he gets home. Luckily for him, his youngest daughter, Eve,  is cut from the same cloth, and shares his interests and conservative worldview.

Mike believes in speaking his mind and sharing his perspective with his “fans” and the show celebrates the Constitution, the Bill of Rights and all the freedoms that Americans cherish. Just about every episode features one of Mike’s video blogs (vlogs), where he mentions the importance of free speech, privacy, personal responsibility, common sense, and yes, gun rights.

Uniquely, its storylines have tackled gun rights issues from a pro-gun perspective.

In one episode, Mike’s oldest daughter’s fiancé confronts her about having a gun in the house, and she decides to give it back to her father. Mike resists at first, but eventually accepts it and uses it as an opportunity to emphasize the importance of having a gun for protection. He ends the conversation by telling her to call him if she ever finds herself in danger so that he can come with his gun.

The show also seems to promote hunting. In another episode, his middle daughter realizes that she can get feathers for her clothing line by hunting pheasants, so she joins her younger sister on a hunting trip, and brings back several. To the surprise of everyone, she relishes in the sport of it.

Moreover, Eve is in Junior ROTC, and frequently boasts about her marksman skills with pride.  Where else on network television do you find such a positive light shed on firearms?

Of course, “Last Man Standing” wisely strays from becoming too biased. Mike is always balanced out by his wife, his oldest daughter, and her uber-liberal Canadian fiancé. In fact, the show even received a positive review from the liberal magazine Slate. And that says something.

Yet the show is clear enough to get the message across. In our politically correct culture, Tim Allen has brilliantly found a way to make private gun ownership “acceptable” on network television.

It is unsurprising that “Last Man Standing” has climbed the ratings (8 million views when you include DVR viewers) and has endured four seasons, despite the fact that it’s been scheduled against shows like NCIS. After all, another show that defends the Second Amendment, A&E‘s Duck Dynasty, drew a record-breaking 11.8 million viewers to its Season Four premiere, ranking it as the number one nonfiction series telecast in cable history.

These programs should send a message to Hollywood: people are tired of the same, preachy gun-control narrative that is spewed by actors on medical dramas, crime shows, and ESPN reporters.

“Last Man Standing” offers Americans a refreshing reminder of what it means to be American. By dealing with hot topics the American way—through discussion and debate—it offers both sides of the argument, and allows its viewers to wrestle with the issues on their own. Even better, it doesn’t villainize either side in the process.

The gun debate is so plagued with so much misinformation and so many misinformed gun grabbers. Kudos to Tim Allen and ABC for offering viewers a different perspective than the politically correct one.