Savage’s new A17 delayed-blowback semi-auto magnum rimfire rifle is now shipping. This all-new design was built from the ground up to handle high-pressure rimfire cartridges and is being launched chambered for .17 HMR.

These rifles are leaving production facilities now and on trucks headed for distributors and should be available in stores very shortly, in as little as a week from today. Other chamberings are possible, of course, as .17 HMR is based on .22 Magnum.

Built for varmint-hunting and small scale target shooting the A17 is a modern magnum rimfire rifle with a 22-inch, button-rifled, carbon steel barrel with a high-gloss finish and matching receiver. The bolt is chrome-lined for added wear resistance and ease of cleaning.

Additionally, Savage teamed up with CCI to develop a load tailor-made for the A17 and its ability to handle higher pressures. The result is CCI .17 HMR A17, a varmint-tipped load that runs as 2,650 feet per second. That’s 100 feet per second more compared to other ammo using the same bullet weights, generating 265 foot-pounds of force at the muzzle.

The A17 is unlike standard straight-blowback rimfire rifles, it uses an interrupter lug to delay the rearward motion of the bolt for a split second, long enough to ensure that the the bolt doesn’t open until the system has returned to safe pressure levels after firing, as shown in the video above. 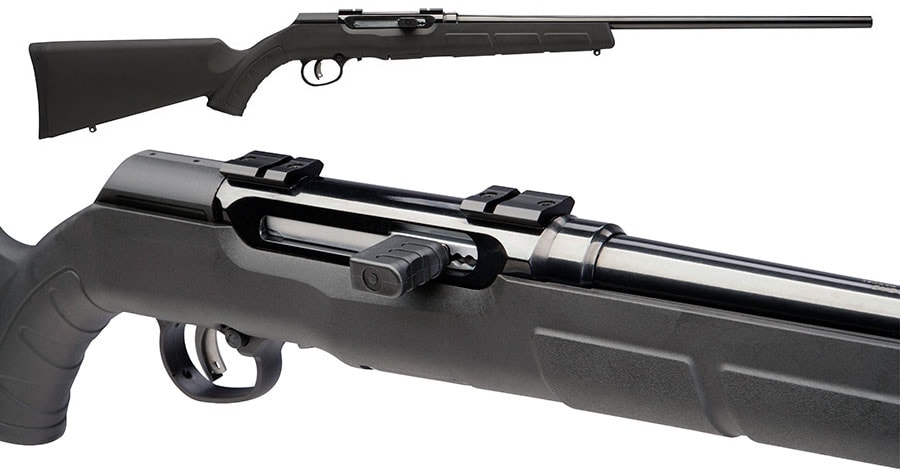 The A17 is built big with a chunky steel receiver and oversized bolt. (Photo: Savage)

The A17 costs a little more than your average plinker with a suggested list price of $465, though real-world prices will hopefully be closer to $400. Still, with unique products like this it can sometimes take a little longer for retail prices to drop below MSRP so we’ll just have to wait and see.

Of course the higher price does get you an above-average semi-auto rimfire rifle that includes Savage’s popular AccuTrigger and an oversized bolt. The rifle doesn’t have iron sights, though, it needs an optic, which is a hidden cost for some.

The A17 comes with synthetic stock with two sling studs for now, and feeds from detachable 10-round rotary magazines. All in the rifle weighs less than 5.5 pounds, light enough for any shooter to carry and shoot all day long.