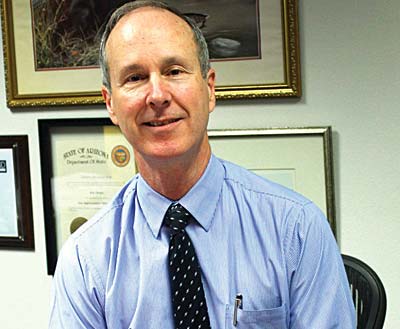 The Arizona state House is on the verge of passing a measure that would establish an interstate compact that would effectively block any state or local transfer regulations on guns in excess of federal law.

Given preliminary approval Monday after debate on the House floor, the bill would prevent future state lawmakers from expanding background check requirements and invite other states to do the same.

Thorpe’s proposal, HB 2431, would form the Uniform Firearms Transfer Compact with Arizona as the inaugural member. As part of the compact, to which invitations would be made to other states, member states would be restricted from establishing or enforcing any law or policy that would impose a fee, fine or liability for firearms transfers that take place in excess of federal laws.

Members of the compact would join for five year terms and would be bound to prohibit any expanded background check measure in their area no matter if it was in the form of a voter initiative, as in Washington last year, or by legislation, such as in Vermont this year. It would also provide for a retroactive repeal of restrictions already in place by states that elect to join the compact.

Should a federal background check expansion such as the one proposed by bipartisan lawmakers on Capitol Hill last week become the law of the land, compact members could face a legal obligation to comply.

Some questioned if the measure as written would actually compromise states’ rights by joining a strictly binding agreement.

The quest for expanded background checks at the state level has become in recent months the calling card of gun control organizations.

In 2014, Washington state held a historic up or down ballot initiative that passed by nine points to mandate an 18-page measure to greatly expand checks in that Pacific Northwest state. Former New York Mayor Michael Bloomberg’s Everytown for Gun Safety group funded the lengthy campaign in large part. Following the Washington win, Everytown moved on to Nevada while promising to recycle the same model in other states.

The Arizona proposal, intended as a counter to such initiatives, is perplexing to some Second Amendment scholars.

“If passed, this legislation could effectively tie lawmakers’ and voters’ hands on gun control. Indeed, that appears to be it’s sole purpose,” Adam Winkler, a professor of constitutional law at UCLA, explained to Guns.com Wednesday. “There is no serious political push for expanded background checks in Arizona today, so this law is geared toward preventing such law from being enacted by future legislatures or ballot measures. The odd thing is how much this legislation empowers the federal government. One might have thought that Arizona lawmakers who value state rights and the power of Arizonans wouldn’t want gun control to be set by Congress and the president.”

Arizona’s bill would have final approval in the state House by March 20 to allow debate in the state Senate before the end of the current session.