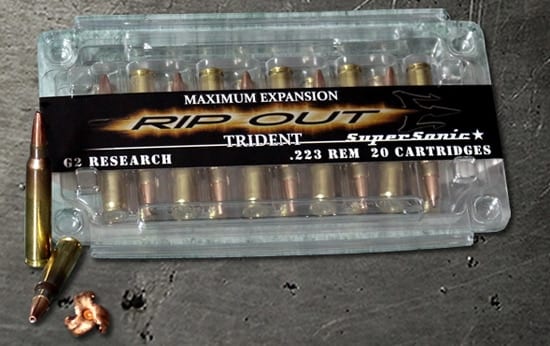 Ammo maker G2 Research announced a new hunting and tactical .223 round, the Ripout “Trident” Round.

According to the product announcement, the new round “produces a massive wound channel that helps hunters achieve accurate, sure, swift and quick kills.”

The Trident Round uses a fast-expanding, premium-grade copper alloy, 65-grain, hollow-point, Spitzer boattail bullet that’s also suppressor-friendly. And it has a velocity of 2,840 feet-per-second.

The Georgia-based company says the round “produces enormous hydrostatic shock and the bullet expands to a diameter of nearly three times its original diameter — and yet stays intact so the permanent wound channel is long as well as wide, resulting in incredibly quick kills.”

The company machines bullets in a specialized CNC machine and that they’re engineered to fully expand within the first inch of impact.