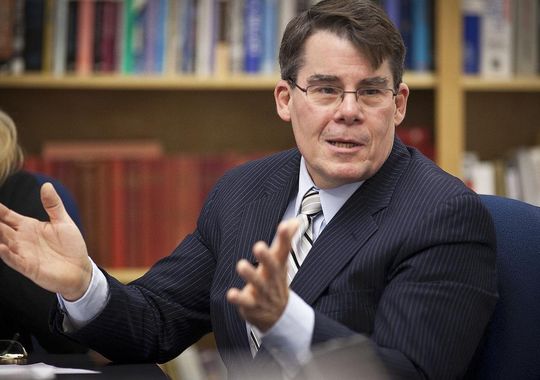 Senate Majority Leader Michael Gronstal, head of the Democrat-controlled Iowa Senate, feels there are “sticking points” to work through on a measure that passed the state House by a huge margin Tuesday. (Photo: Des Moines Register)

A measure to protect the identity of concealed carry permit holders, repeal a ban on sound suppressors and other reforms passed the Iowa House by a 75-24 vote Tuesday.

The legislation sailed through the chamber without debate and aims to protect nearly a quarter million Iowa handgun permit holders from data releases as well allow the state to become the 40th to allow private ownership of otherwise legal sound suppressors. The proposal aced the House Judiciary Committee by unanimous vote last week.

“It’s not often that you can bring a bill of this enormity to the floor of the Iowa House and have no debate on it,” said Rep. Matt Windschitl, R-Missouri Valley. “So I’ll take this as a compliment that this is a well-crafted piece of legislation that everybody in this chamber can get behind, hopefully, that does right by 3 million Iowans and advances our Second Amendment rights.”

The sweeping 28 pages of legislation encompassed by Windschitl’s House Study Bill 201, include a host of reforms to the state’s gun laws.

First, it would place gun permit holder information out of bounds from public and Freedom of Information requests. Currently, anyone can get the name, address and birth date of concealed carry permit holders by a simple process.

Next in the legislation would be to repeal the state’s near total ban on National Firearms Act-compliant sound suppressors. Currently, the Hawkeye State prohibits private citizens from owning an otherwise legal suppressor. The only slim exceptions are for devices “possessed and used by a person solely for the purpose of shooting a deer pursuant to an approved city special deer population control plan.”

In addition to the privacy and NFA sections of the legislation, the proposal also includes mandates to loosen regulations on youth handgun possession for target shooting and hunting reasons provided they are given the firearm by a parent, instructor, or guardian. Current laws limit this practice to youth 14 and over.

Finally, the measure strengthens straw purchase laws in the state, proposes to allow mandatory gun training to be accomplished online and extended to every ten years from the current five, and extends the ability of licensed security guards to carry on public school property.

Next stop for the bill is the Iowa Senate, where Democrats have already cited they have a number of issues with the omnibus legislation that need to be ironed out before it can reach a floor vote. As in last session, the wild card for the Iowa gun reform bill to see the desk of Gov. Terry Branstad (R) is to make it through the 50-seat state Senate with its 26 Democrats and 24 Republicans, the same split seen the last four years.

“There are people of good faith working on that issue and we will see if they find a consensus. There are multiple sticking points,” Senate Majority Leader Michael Gronstal told the Des Moines Register last week.

Suppressor industry leaders are hopeful that this session’s bill will continue its already impressive forward momentum.

“With today’s vote, Iowa is on track to become the 40th state to legalize suppressor ownership,” Knox Williams, president of the American Suppressor Association, told Guns.com Tuesday. “Although we are one step closer, we must now turn our attention to the Senate to see if they will do the same. We are excited and optimistic about the prospects of this bill becoming law, and will do everything that we can to ensure that this bill passes.”

In recent years, pro-suppressor legislation has gained traction nationwide. Last year alone, Ohio, Louisiana and Georgia saw lawmakers responding to increased pressure from sportsmen and hobbyists to expand protections and use for suppressors. This came while Alabama saw regulatory changes that paved the way for hunters to use their suppressors for the first time in generations.

This January, a Florida judge dismissed a challenge to a law expanding use in the Sunshine State.

Besides Iowa, measures to expand lawful suppressor use in no less than five states are in the works including Iowa neighbors, Illinois and Minnesota.

Iowa gun rights advocates point out that these Title II devices are already heavily regulated by the federal government to the extent that further state regulation is redundant.

“Currently residents of 39 other states are free to own suppressors,” advised Iowa Firearms Coalition President Barry Snell in an email to Guns.com. “These accessories work just like a car muffler to reduce noise pollution and hearing loss. If legalized in Iowa, suppressors would still be regulated by the Bureau of Alcohol Tobacco Firearms and Explosives (BATFE). Anyone purchasing a suppressor is required to undergo an additional Federal background check, pay a $200 tax, and join a BATFE registry.”

The Iowa House bill is expected to be debated in Senate committee in coming weeks.