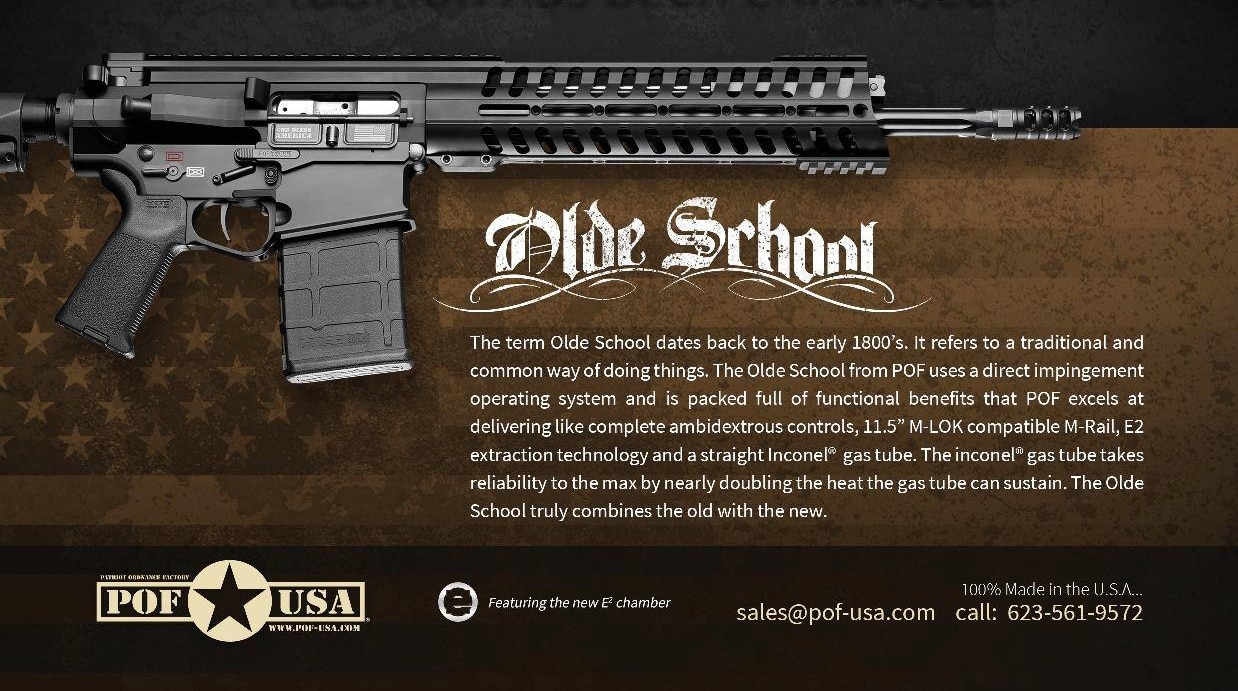 The Olde School is their first direct-impingement rifle, and even then, D.I. like never before. (Photo: POF)

The Patriot Ordnance Factory, POF, is well-known for their hard-use, heavy-duty piston-driven AR-style rifles and uppers in 5.56 and 7.62 NATO, but they’re doing something a little different for 2015. They’re going “Olde School” with direct-impingement rifles chambered for .308 Winchester/7.62 NATO.

Still, this is POF, even the gas system is going to be improved. Although these rifles are direct impingement, they have a 3-position gas block and a straight Inconel gas tube. Inconel belongs to the exotic “superalloy” family of materials and is extremely resistant to both heat and pressure; it’s just perfect for an enhanced gas tube.

These new rifles are still built to the same standards as existing POF guns and promise “relentless reliability” along with many features and improvements not seen on standard direct impingement rifles including an adjustable gas block like the one used for their piston guns.

Olde School rifles bring everything that their piston rifles have to the table including the E2 semi-fluted chamber for enhanced extraction, one-piece M-Lok handguard that runs the entire length of the upper receiver and fully-ambidextrous controls, including bolt catches on both sides.

The E2 chamber is unique to POF rifles. The neck has small flutes to allow gas from burning powder to unseal the spent case from the chamber before it is ejected. This leads to better extraction and improved reliability, even when thing start to foul up. The flutes are still small enough that they don’t cause a lot of case deformation, either, which is a plus for reloaders.

In addition to having truly ambidextrous, precision machined billet receivers, the Olde School lowers have anti-rotation pins for the fire control group, ensuring that the trigger is consistent pull after pull.

The Olde School is offered with 14.5-, 16.5- and 20-inch barrels and the barrels are topped with hearty 3-baffle muzzle brakes with integral standoff devices. Additionally Olde School guns are offered with a standard black or optional nickel-boron NP3 finish.

The handguard accepts all M-Lok accessories but still has two short sections of Picatinny rail at the front of the handguard, one for grips or bipods, and a small top rail for a front sight or weaponlight mount.

Even with its overbuilt rails and rugged design, these .308s still manage to weigh in at around 8 pounds, and just a bit more for the 16- and 20-inch models.

Of course, POF rifles don’t come cheap, and these Olde School guns have a suggested retail price of $2,599. Real-world prices are usually lower, but even then, these guns fetch a premium.

The 7.62x39mm Puritan is piston-driven and doesn’t care how dirty your ammo is or what the cases are made of. (Photo: POF)

If you’re interested in getting a .30-caliber POF gun but don’t want to drop that much on a rifle, you should also know that they announced a new 7.62x39mm Puritan rifle earlier this year. The Puritan series is made up of their entry-level rifles and uppers that use the same chamber, gas piston system and build quality of their flagship rifles but with fewer premium components — and lower sticker prices by about $1,000.