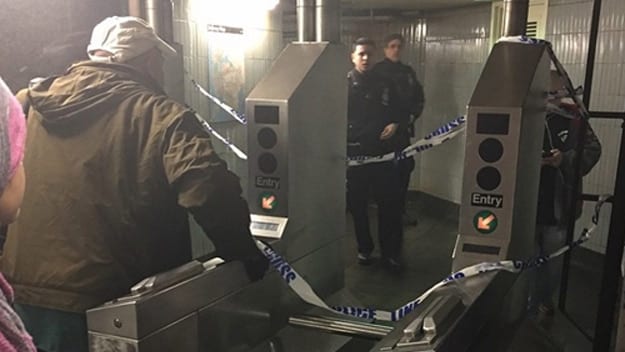 Police tape blocks the deadly scene of an altercation between a retired correctional officer who shot and killed a man on a New York City subway platform the night of Tuesday, March 10, 2015. (Photo: New York Daily News)

A man was shot and killed Tuesday evening by a retired correctional officer during an altercation in a New York City subway station Tuesday night, CBS 2 News reported.

Police responded to the scene at about 6:45 p.m., after witnesses say a Gilbert Drogheo, 32, and a woman began to argue on the train, New York Daily News reported. The unidentified 69-year-old retired officer boarded the train and reportedly walked between the two passengers arguing, after which either Drogheo or his friend responded with “Oh, I got you now, my n—-.”

The retired officer then told the man to leave him alone, The Daily News reported. Either Drogheo or his friend punched the man in the head. The retired officer reportedly pointed the gun at the man who punched him, but was then shoved onto a subway car seat.

“He just clocked the guy,” a witness said. “The older man was taken back. I saw him pull the gun out of the pocket.”

The argument continued out on the platform, where the officer followed the two men and confronted them after reportedly inserting a magazine into his gun. The two began to scuffle and the gun discharged and Drogheo was hit once in the torso, The Daily News reported. He later died from the injury in an area hospital.

“It’s hand-to-hand combat, wrestling, and at some point the gun goes off,” an MTA source told The Daily News.

A high-ranking police official told The Daily News that the man could have been lawfully carrying his gun and may not be charged if he’s found not at fault.