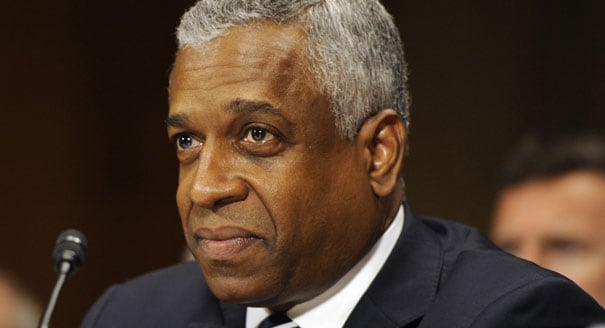 Gun rights advocates are seeking to run ATF Director B. Todd Jones out of office over the green tip fiasco. (Photo: AP)

Calling the recent M855 ammunition controversy a “colossal blunder,” the Citizens Committee for the Right to Keep and Bear Arms is calling for the resignation or dismissal of Bureau of Alcohol, Tobacco, Firearms, and Explosives Director B. Todd Jones.

Jones, a former U.S. attorney, assumed the position of acting director of the ATF in 2011 following the resignation of Kenneth E. Melson in the aftermath of the Fast and Furious scandal. He was confirmed as director in 2013 after a close 53 to 42 Senate vote.

Now, with the agency pulling an abrupt about face on a proposed rule change to give itself more flexibility to exempt armor piercing ammo for sporting purposes, one national gun rights group feels Todd has overstayed his welcome.

“Over the years, ATF has earned the reputation of being a rogue agency,” said CCRKBA Chairman Alan Gottlieb in a statement obtained by Guns.com. “Anti-gunners defended the agency through the Fast and Furious scandal by blaming the lack of a permanent director. When Jones was permanently appointed, there was at least a presumption that things would change. But nobody was fired over Fast and Furious, much less prosecuted.

“Now ATF tried to ban ammunition that was specifically identified in regulations as exempt from definition as armor-piercing at the same time the exemption vanished from the regulations pamphlet,” said Gottlieb. “You cannot run a law-enforcement agency by criminalizing legal products, or by deliberately attempting to change policies that only affect law-abiding citizens.

“This has happened under Jones’ administration,” he said, “and it cannot be allowed to continue. If the only way to shake ATF back to reality is to fire the boss, then B. Todd Jones has to go.”

Gottlieb’s group has been extensively involved in litigation with the Department of Justice, the parent branch of the ATF, and as such has named Jones in his official capacity as a defendant in a number of civil rights lawsuits.

In the Director’s time in office he has had to defend the agency against Congressional scrutiny, public blow back into botched sting operations, and industry lawsuits over decisions made by the agency’s technology branch.

This month’s saga over the M855 “green tip” cartridge saw 52 U.S. Senators and 239 members of the House signing letters to Jones expressing “serious concerns” over the proposed framework for review of the round.

However, even with the agency’s decision to temporarily shelve any action on the suddenly hot button issue, those on the other side of the aisle from the mostly Republican lawmakers demanding answers from Jones were critical of the delay.

“The ATF’s decision not to ban these life threatening armor-piercing bullets is not only dangerous but reckless. Our law enforcement officers and first responders risk their lives every day to keep our communities safe — ATF should stop jeopardizing their safety by caving to the gun lobby and implement this common-sense proposal to save lives and keep our men and women in uniform safe,” said Rep. Steve Israel, D-NY, in a statement Wednesday.

Since the post was established in 1970, the agaency has seen a full dozen directors and acting directors. While long serving early holders of the post such as Rex D. Davidson and Stephen Higgins maintained their position for eight and eleven years respectively, since 2004 the assignment has been a revolving door with no less than seven directors in the past decade — of which Jones has been the longest serving.