Marine reservist Tahmooressi again in jail, this time in Georgia 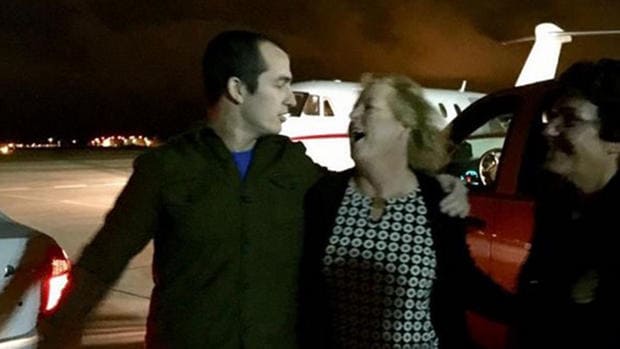 Andrew Tahmooressi and his mother Jill, pictured here just after his release from a Tijuana, Mexico jail on October 31, 2014. (Photo courtesy of the Tahmooressi family.)

The Marine Corps reservist who took a wrong turn on a California roadway and ended up jailed in Mexico on a weapons charge has again landed himself behind bars, this time in Georgia.

Police pulled over Andrew Tahmooressi in Twin City on Wednesday for an unknown traffic violation and ended up finding an open container in his vehicle, CNN reported.

When the officers attempted to administer a DUI test, Tahmooressi reportedly refused.

“He will be arraigned in the morning,” the Marine’s spokesman, Jonathan Franks, said Wednesday night.

Tahmooressi was held in a jail in Tijuana for almost eight months before a judge ordered his release. The Marine reservist maintains he crossed the border with several firearms and more than 400 rounds of ammunition on March 31, 2014 accidentally. He initially parked on the U.S. side and walked across to Mexico, where he spent some time in a motel. When he returned to California to retrieve his vehicle, he took a wrong turn, Tahmooressi told Fox News.

In his truck, Tahmooressi carried a 12-guage shotgun he bought for a hunting trip in Alaska when he was 18, an AR rifle purchased about six months after his November 2012 honorable discharge from the Marine Corps and a .45-caliber pistol. The paperwork for all three weapons were reportedly in Tahmooressi’s truck at the time of arrest.