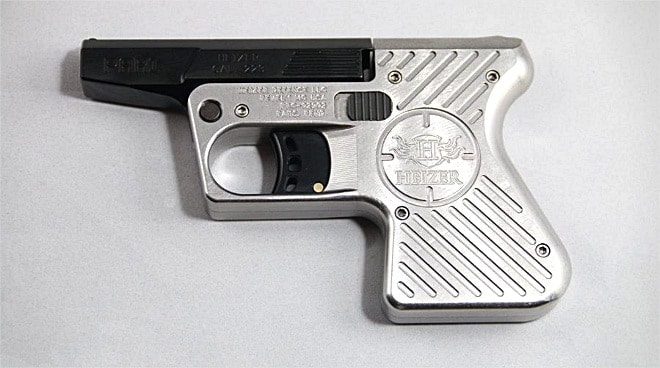 Heizer Defense is making the PAK1 “Pocket AK Pistol” official, and it’s a single-shot derringer chambered for 7.62x39mm, the original AK-47 cartridge. These little guns may have started out as a last-ditch option in concept, but where they really shine is at the range, where fun is measured in fireballs.

The Pocket AK will get its full debut at the upcoming NRA Annual Meeting in Nashville April 10 through 12. This expands the Heizer family to four cartridges following the launch of the Pocket AR in .223 Remington and the first Heizer derringer, the .410-bore/.45 Colt Pocket Shotgun.

Heizer’s first gun may be a range toy in .410 but in .45 Colt it’s a different animal. Modern .45 Colt loads are fierce and can pick up enough steam to make a difference even with smaller barrels making it a viable — and last — option; a single shot that can be tucked into any pocket.

The Pocket AK gets lumped in with the Pocket AR. They are literally for having a blast at the range. With a short barrel that’s more chamber than bore they’re a great way to turn unspent powder into banging balls of fire. They may be effective at self-defense on the condition that your attacker is flammable.

There’s no law that says guns have to be practical, thankfully, and the Pocket AK, with a street price expected to be under $400, is one of the cheaper options in the world of pure fun guns, especially given the price of 7.62x39mm relative to .223 Rem. or 5.56 NATO.

For existing Heizer owners there’s more news, Heizer Defense will also be selling standalone barrel assemblies so you can convert your Pocket Shotgun or Pocket AR into a Pocket AK and vice-versa. 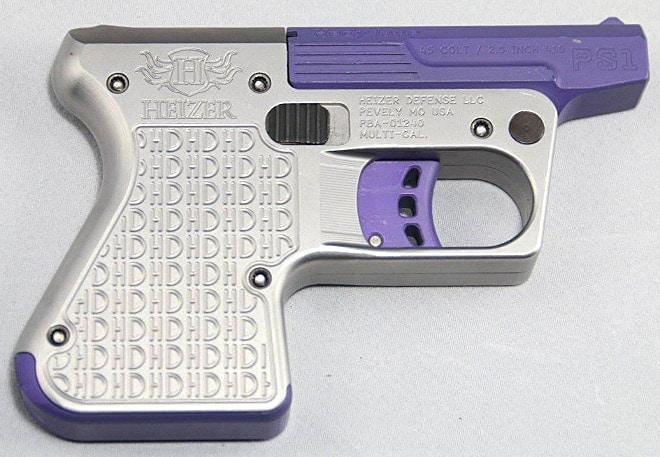 Heizer plans on expanding their derringer offerings throughout 2015 and has already mentioned an upcoming .308 Winchester model, the Pocket Sniper. The company is also working on two-tone models and purple pistols for the Hedy Jane series.

All of these guns are based on the same basic chassis, a very thin break-action single-shot derringer design. They use heavy stainless steel construction and weigh in at a little over 20 ounces, varying by model. They’re extremely narrow at 0.7 inches wide and 3.8 inches tall. The Pocket AR measures in at about 4.6 inches long and we expect the Pocket AK to fit in a similar-sized package.

If you like the idea of the Pocket AR but would never consider using up your lately expensive and sometimes hard-to-find .223 and 5.56 ammo, then keep your eyes peeled for the upcoming Pocket AK. It’s just a few weeks away.