Lawmakers in West Virginia are delivering to Gov. Earl Ray Tomblin legislation that will expand access to National Firearms Act-controlled items and grant concealed carry without a permit.

The two measures have tracked through the state legislature by wide margins with the shall-sign measure unanimously approved in both chambers while the proposal to allow permitless concealed carry passed Thursday 79-21 in the state House after the Senate polled 32-2 for it last week.

“We’re here to protect our people from big government,” said Delegate Michael Ihle, R-Jackson, of the carry bill before yesterday’s vote. “This is a step in the right direction. It’s not perfect, but it gets us much closer on the 2nd Amendment to doing what’s right.”

The legislation, SB 347, would repeal language in the current state code that makes it illegal to carry a concealed handgun without a permit. As long as the individual is legally able to possess a firearm under state and federal laws, they may carry a concealed pistol or revolver for self-defense purposes. This would include carrying while hiking or hunting, or while traveling in a motor vehicle, or in public. However, with or without a permit, carry would still be prohibited on certain public properties such as the state Capitol, courthouses, public schools and colleges.

Currently, the practice outlined in the bill, commonly known as constitutional carry, is the law of the land in Vermont, Arizona, Alaska and Wyoming.

The proposal was panned by the West Virginia Sheriff’s Association, U.S. Sen. Joe Manchin (D), a number of currently sitting mayors in the state, as well as national gun control groups who argued the $100 fee, training and vetting requirements now in place are there for a reason.

“The current license requirements in West Virginia include things like undergoing basic training on how to handle and fire a gun, passing a criminal background check, and other reasonable safeguards,” Dee Price Childress, with the West Virginia chapter of Moms Demand Action, said in a statement. “If a person wants to carry a loaded, concealed handgun in public they should be required to demonstrate they have a clean criminal record and have been trained to carry a gun safely.”

Constitutional carry bills have been a popular item nationwide with state legislatures this session. Texas, New Hampshire, Utah and Kansas have all made progress on measures to allow the practice. 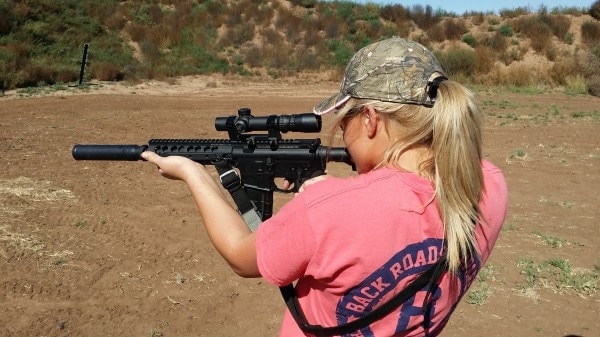 Title II devices such as suppressors and short-barreled rifles are at the heart of the shall-sign legislation that passed without dissent through the WV legislature (Photo: AAC)

The second and more popular measure headed to the governor, SB 284, which did not see a single vote cast against it in either chamber, ensures that those who pass a background check can have the ability to purchase and own Title II devices such as suppressors and full-auto firearms.

In order to legally own one of these without going through a trust, a local chief law enforcement officer must sign an individual’s application before completing the transfer. In most states, the CLEO, usually the local police chief or county sheriff, can technically approve or deny for arbitrary reasons, as it’s up to his or her own discretion.

The West Virginia measure requires a CLEO to sign off on the paperwork within 30 days providing the applicant pass a background check.

Gun rights advocates explain that the CLEO process harkens back to another era.

“When the National Firearms Act of 1934 was signed into law, computerized background checks did not exist,” explained Knox Williams, president of the American Suppressor Association to Guns.com. “At that time, the CLEO signoff was the only means by which individuals applying for a transfer of an NFA item could be vetted. Since 1934, technology has come full circle, but the now antiquated CLEO signoff requirement has remained.”

Last year, at least four states passed shall sign or shall certify legislation to help modernize the long-held practice.

Both bills are now headed to Tomblin for consideration. Although a Democrat, Tomblin has a long history of signing pro-gun legislation and has in the past earned the endorsement of the National Rifle Association.