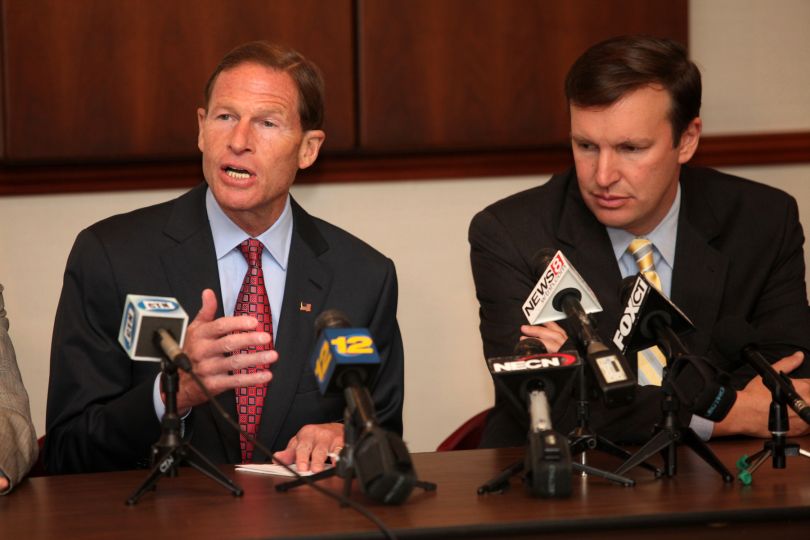 Following the delay of a Bureau of Alcohol, Tobacco, Firearms, and Explosives rule change over M855 green tip ammo, a number of lawmakers in the U.S. Congress are pursuing a ban.

Legislation introduced in the U.S. House Friday will mandate that only military and law enforcement officers are permitted to use the suddenly-controversial 5.56mm rounds while Connecticut’s U.S. Sens. Richard Blumenthal and Chris Murphy, both Democrats, joined New Haven Police Chief Dean Esserman in decrying the use of the round.

“It’s time for Congress and this administration to take the reins of public policy back from the gun lobby. These bullets may make money for the gun industry but they can kill police officers,” Murphy said. “When we have to weigh the slight economic detriment to the gun industry versus the protection of our sworn public service officers, [police] should win that argument every single day.”

The M855, adopted by the U.S. military in the 1970s as a more humane alternative to the M193 cartridge used during the Vietnam conflict, is a popular loading due to its widespread availability on the surplus market. However, the ATF last month announced plans for revising the framework for determining if it is used primarily for sporting purposes.

In 1986, the M855 ammo was exempt for sporting purposes, but standards, processes, and firearm types changed in the past 29 years. For instance, the AR-15 — the M16 rifle’s civilian equivalent — is now available in a pistol configuration with nearly identical features and functionality.

Although most 5.56mm pistols are very bulky when compared to other handguns, for example the Kel-Tec PLR-16, tips the scales at more than 3 pounds unloaded and is over a foot and a half long, Blumenthal asserts that their concealability is a threat to police officers.

“These handguns are widely available, easily affordable and readily concealed,” Blumenthal said. “That’s why they are so dangerous to the law enforcement professionals that are here today.”

Coming the same day as the Connecticut press conference, U.S. Rep. Eliot Engel, D-NY, introduced his Armor Piercing Bullets Act to the House that would keep what the lawmaker calls, “cop killing ammunition,” out of the hands of gun owners.

“Armor piercing rounds like green tips should only be in the hands of military personnel or police officers, period. There is absolutely no compelling argument to be made for anyone else to have access to them,” Engel said in a statement.

The framework of Engel’s measure, entered as HR 1358, would enact into law a framework that would “restrict the sale of small caliber, .223-derived, 5.56x45mm NATO ‘green tip’ rounds, cartridges commonly used in AR-15 semi-automatic assault rifles that can penetrate the soft body armor often worn by police.”

While the full text of the proposal is not available, it should be noted that, per National Institute of Justice standards on ballistic-resistant armor, the three classification levels of soft body armor are rated to withstand handgun rounds up to .357 SIG or .44 Magnum only — both of which are ballistically inferior to virtually any centerfire rifle loading.

The lawmakers’ call for prohibition met with quick response from pro-gun groups.

Arguing that there is no documented evidence of criminal misuse of M855 ammunition, Citizens Committee for the Right to Keep and Bear Arms Chairman Alan Gottlieb questioned the stated reasons for a ban.

“All this does is pour gasoline on a fire at the grassroots level,” said Gottlieb in a statement emailed to Guns.com. “This isn’t about police officer safety, and it’s not about crime control. This is about having a legislative trophy, an ego-stroke designed entirely to provoke and infuriate the tens of thousands of gun owners who sent comments to the BATF over the past couple of weeks, opposing the proposed framework that would ban .223-caliber M855 ammunition, which has been exempt from federal rules on armor piercing ammunition for many years.”

Engel’s bill has been referred to the House Committee on the Judiciary.

It is unfortunate that Senators Blumenthal and Murphy continue to misinform citizens on firearms related issues and promote the latest misaddressed and ineffective gun control measure.

Some 241 bipartisan members of the U.S. House of Representatives and 58 Senators (including five of their Democratic colleagues) along with almost 90,000 American citizens convinced the Bureau of Alcohol, Tobacco and Firearms and Explosives (ATF) this week to withdraw a proposal to overreach its authority and ban a type of popular, widely held 5.56 mm rifle ammunition used by target shooters and hunters that has been in the hands of law-abiding Americans since 1986.  We appreciate ATF’s responsiveness and will work with the bureau on the issues raised by the now withdrawn proposal.

In contrast to what was portrayed in New Haven today, the Fraternal Order of Police’s national president has said that this ammunition does not pose any particular danger to law enforcement, a view shared by the National Sheriffs’ Association and others in law enforcement. There has never been a case where this ammunition has been used in the grave manner that the Senators suggest is an ongoing threat.

We would encourage the Senators to work to address the true threats posed to our law-enforcement officers by criminal activity, instead of initiating news-cycle timed activities that do nothing to promote public safety.