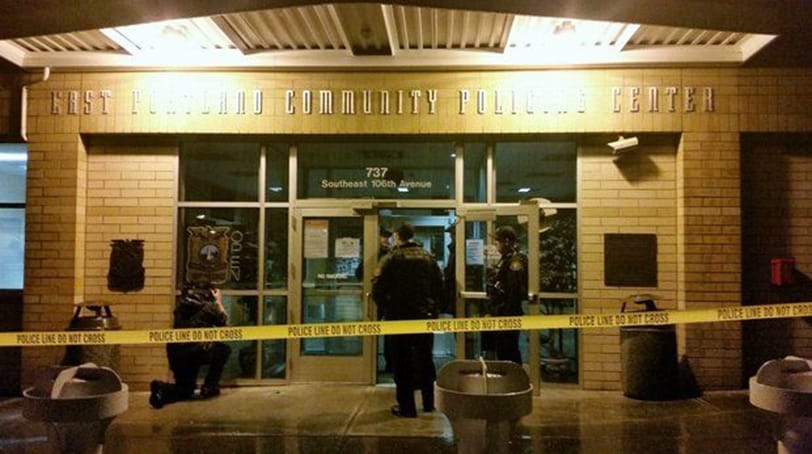 A 16-year-old boy is facing an attempted murder charge in connection with a gang-related shooting that occurred in front of the Portland Police Bureau’s East Precinct late Saturday night, police said. (Photo: PPB)

Authorities are saying a 16-year-old boy shot at a rival gang member in front of the Portland Police Bureau’s East Precinct on Saturday night, but the teen’s mother said her son was trying to protect a friend from the group, Oregon Live reported.

No one was injured after the shooting, but Dontae Eugene Mathis Jr. was still arraigned Monday afternoon in juvenile court for attempted murder, attempted first-degree assault and unlawful use of a weapon, police told Oregon Live.

The boy’s mother, Jamie Farlow, said Mathis was coming from a party at the community center across  the street from the police station when several members of the Rolling 60s Crip gang started bullying his friend, so her son decided “to scare off the kids who were messing with his friend.”

The shooting is one of 30 gang-related incidents that have occurred in the city this year, which surpasses the number of similar incidents last year by more than double, Oregon Live reported.

One of the teens involved in this weekend’s shooting reportedly ran to the police station and knocked on the door asking for help after being shot at. Mathis reportedly dropped the gun after firing and striking the front of the precinct. Officers took Mathis into custody and later found the gun, Oregon Live reported.