SilencerCo has picked a fight. The renown suppressor manufacturer has long been opposed to restrictions on the legal ownership of National Firearm Act-regulated guns and accessories, but with this first step, it’s clear they’re taking things to the next level.

Starting at the top of this year at the Shooting Hunting Outdoor Trade Show 2015, SilencerCo has been committed to “Fight the Noise” with their walled-off, peaceful and quiet and ultimately award-winning “Best Booth” showroom.

The Fight the Noise campaign expands their platform, targeting a larger audience to increase suppressor awareness and sales. The idea is to teach people about suppressors, their role in firearms and the laws surrounding NFA-regulated hardware. And in the process, outlay a new demographic: “the Suppressed.”

The Suppressed refers to people burdened by laws that restrict or outright prevent ownership of any and all NFA items everywhere, the company said.

“SilencerCo’s Fight the Noise campaign (officially referred to as a movement) is an effort to educate the general populace about individual rights and how they can play a role in supporting the broadening of personal freedoms related to the legal ownership of NFA items,” the company said.

SilencerCo plans to tap people tuned into other venues to expand their reach. First up is Cam Zink, a mountain bike freerider and acclaimed athlete. A professional biker, Zink has earned a number of awards in extreme sports, including the Red Bull Rampage. He currently holds the record for the world’s longest backflip at 100 feet, 3 inches.

A play on the iconic “Tank Man” photo from the Tiananmen Square protests of 1989. (Photo: SilencerCo)

“I feel like having a suppressor is like having a muffler on your car, you know,” Zink said. “You could drive around without the muffler and be fine, it’s just gonna annoy people. It’s like riding a bike without a helmet — you could do it, but why would you?”

In addition to bringing in spokespeople from other fields into the world of NFA-regulated shooting, SilencerCo is asking fans to get involved through social media with the hashtag #FightTheNoise.

All this fits in with their most recent flagship products, like the Harvester suppressor for hunting rifles and the Salvo 12, the first-ever commercially-produced can for shotguns. These suppressors, while still NFA-regulated, have unmatched public appeal and real drawing power for people outside of black rifle circles.

“Fight the Noise is a movement to regain our voice,” the company said in a press release. “To exercise our right to protect our hearing and silence the sound. To be responsible gun owners and be treated as such. We want law-abiding citizens to have the ability to purchase and own silencers without being subjected to excessive wait times, paperwork, and taxes. We are the silent majority, and it is our time to be heard.”

The company aims to repeal laws that tie paperwork and tax stamps to accessories like suppressors and the first step is getting the word out — to explain how suppressors work, that they don’t actually silence firearms and that they make shooting safer and more approachable. 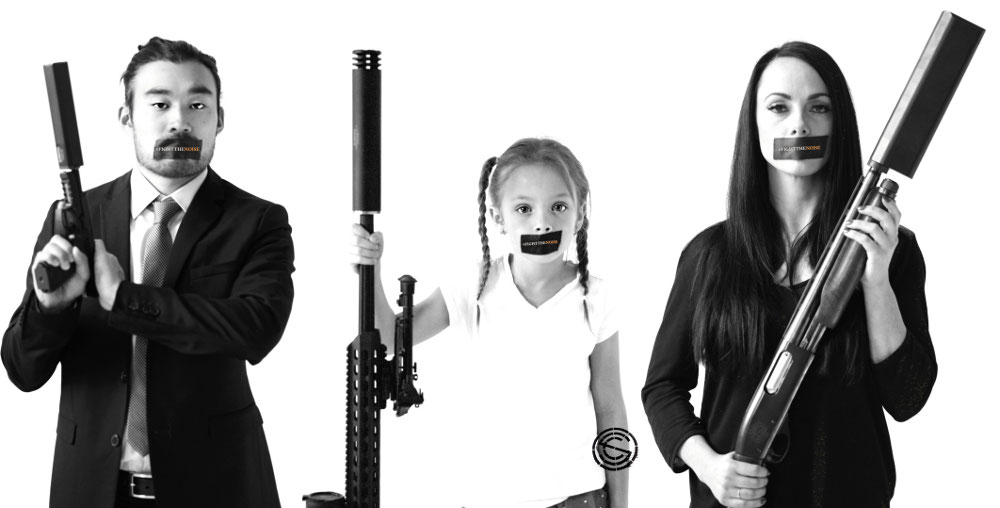 SilencerCo is asking you to #FightTheNoise and will send you the swag you need to participate in the campaign. (Photo: SilencerCo)

SilencerCo is looking to get as many involved as possible. Everyone who signs up will receive a Fight the Noise kit, including tape with the hashtag “#FightTheNoise” to show your support through social media. Members of the movement will continuously receive gear and “propaganda,” SilencerCo swag for sharing the message.

Additionally, everyone joining the movement will be automatically entered to win a SilencerCo EasyTrust, a simple, straightforward personal NFA gun trust. SilencerCo will give away one trust a month to all who join.

One lucky participant will be treated to a free ride and full pass to SilencerCo’s June Quiet Riot match, including airfare and accommodations, and be treated to personal instruction and awarded a custom rifle and silencer to boot. “Because leading a movement is no small feat, and we believe it should come with perks,” says SilencerCo.