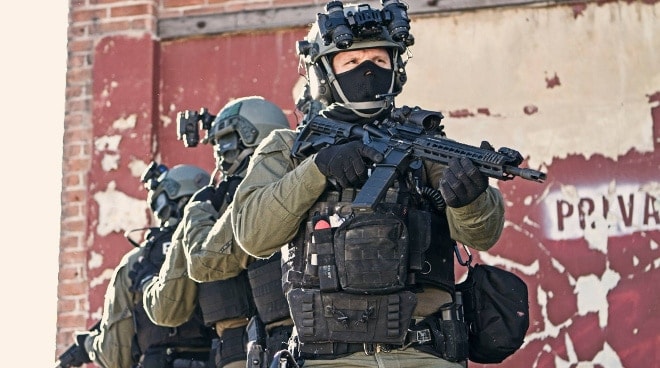 The M4A1-Plus is going to look a lot more like the modern AR-15s used by practical-tactical shooters everywhere. (Photo: PWS)

The General Services Administration has posted a new Army solicitation for an M4A1 upgrade package. This piece of future kit will be called the M4A1-Plus, or M4A1+ for short. The M4A1+ solicitation calls for a host of upgrades that would be right at home on any modern AR-15 rifle.

The Army is looking for a seamless upgrade path that’s completely backwards-compatible with M4 and M4A1 carbines currently in service as well as “ancillary equipment,” including optics, lasers, slings and rail covers, as well as under-barrel accessories. The project allows for a complete upper upgrade, including gas system, sights, barrels and handguards.

The Army has clearly been paying attention to civilian shooters. Over the years competition and recreational shooters have developed the AR-15 into a very accurate and reliable platform that in many ways outclasses the M4 and M4A1.

While the Army is keeping things reasonable with these upgrade requirements, they’re also looking for some features many shooters expect to find on tactical race guns.

Ask any competition shooter and one of the first things to upgrade is the rifle’s trigger. The M4A1+ package is calling for a new trigger to replace the MIL-SPEC components with an enhanced trigger pack. The new fire control group must have a creep-free 4- to 5-pound single-stage trigger for precision shooting. The requirements also call for a fully-automatic, not burst-fire, select-fire control.

Existing rifles with burst-fire triggers have been criticized for their varying trigger pull weights among other issues. The triggers can cause accuracy to suffer and are already being phased out with the adoption of the M4A1.

The M4A1+ requires a free-floating handguard and low-profile gas block as part of the package, which is in-line with their accuracy goals. Carbines with the M4A1+ upgrades must be capable of shooting 5-inch groups at 300 meters and 10-inch groups at 600 meters, presumably with match-grade ammunition.

Those groups translate to 1.5 MOA accuracy. The M4 is more than capable of that level of accuracy with the right components and a free-floating barrel as the commercial AR market has proven repeatedly. It is unusually high by service rifle standards but not out of the question for the design.

The Army wants the new handguards to be tactical tan, with acceptable colors ranging from Coyote to Light Coyote to minimize the rifle’s visual signature. Interestingly enough, the requirements are not for a quad rail handguard but a modular system, as has come to be standard in the commercial black rifle market.

The M4A1+ should have a fixed Picatinny rail on top for sights, optics and other accessories but the the side rails need to be removable, and available in different lengths for different loadouts. They also need to be compatible with existing carbine accessories like pistol grips and bipods.

The desired upgrades also call for new backup iron sights, front and rear, forward sling points, improved flash hiders and improved charging handles. The flash hiders must outperform the current standard flash suppressor, which is already one of the better designs, and the charging handle must be enlarged and ambidextrous.

While it will be some time before we see how any of this materializes, this as great news for soldiers everywhere. We can’t know for certain what the M4A1+ is going to look like, but we do know that it’ll have more than a little resemblance to the more tricked-out AR-15s on the commercial market.