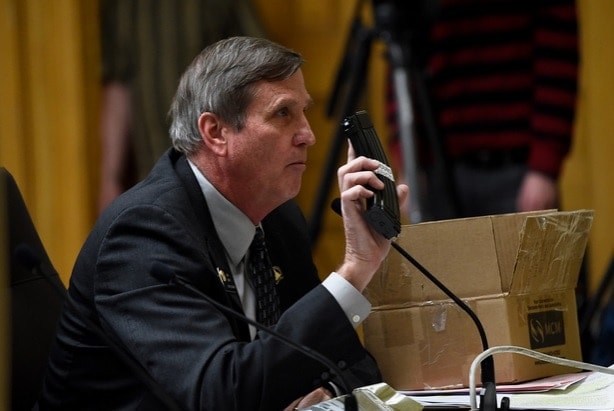 Colorado State Sen. John Cooke, R-Greeley, holds a magazine that can be modified to hold 30 rounds as he speaks to the Senate Judiciary Committee during a hearing for Senate Bill 175 last week (Photo: Joe Amon/The Denver Post)

Taking advantage of the first Republican majority in a decade, GOP lawmakers in the Colorado Senate on Monday gave approval to a bill to end the state’s 2013 limit on magazines holding 15 or more rounds.

The measure passed on a voice vote but is expected to pass a formal roll call next week in the chamber, which is narrowly controlled by the GOP.

“It’s an inanimate object,” Sen. John Cooke, R-Greeley, said of the magazine in debate. “This is not evil. What is evil is in the hearts and the minds of men, and that’s what we need to work on.”

Cooke’s bill, SB 175, aims to repeal Colorado’s prohibition on the sale, transfer, and possession of what are deemed large-capacity magazines defined as those capable of holding more than 15 cartridges. It would likewise void the current requirement that magazines manufactured in the state be marked indicating it was made after July 1, 2013.

Senate Democrats refused to endorse the measure, invoking imagery of the 2012 Aurora movie theatre shooting that occurred in the state.

“I cast my ‘no’ vote today in honor and in memory of those who were murdered and injured and traumatized,” said Sen. Morgan Carroll, D-Aurora.

The current magazine limit was one of the more controversial aspects of a Democrat-backed gun control package that was rushed through the state legislature in early 2013.

The polarizing limit on magazine capacity saw a federal lawsuit from 55 of 62 of the state’s elected sheriffs, a recall election to get rid of senior lawmakers that pushed the measure through, civil disobedience by gun owners and the departure from the state of Magpul Industries, a leading maker of the devices.

Bids to repeal the ban in 2014 as well as in this session’s House never made it out of committee hearings.

That track record gives this week’s tentative success at ending the ban the title of the most successful attempt so far. However, if it passes the Senate in its final vote, it still has to face an uphill fight with Dems in the driver’s seat of a 34-31 House and Gov. John Hickenlooper (D), who signed the ban in the first place, still in office.

Should the proposal arrive at the House it will go to the Committee on State, Veterans and Military Affairs, to which gun rights advocates are already applying pressure.

“This bill would repeal the radical anti-gun legislation passed into law during the 2013 legislative session that arbitrarily limits the number of rounds of ammunition you can use to protect yourself and your family to 15,” reads an alert from the National Rifle Association’s Institute for Legislative Action.