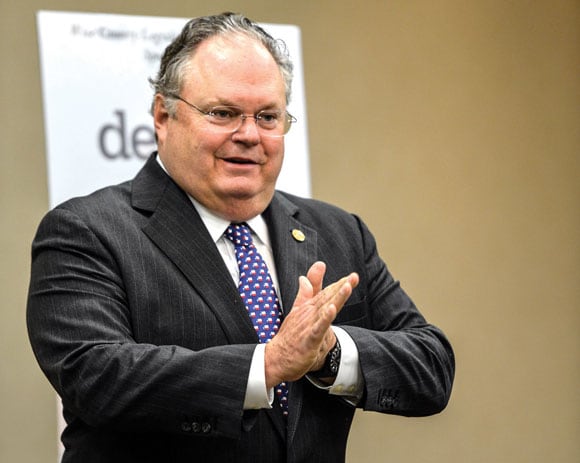 The measure, one of the more conservative of the bushel of gun reform measures submitted to the Texas legislature this session, passed the body after a four-hour debate by a 20-11 vote without picking up a single Democrat.

“I think like we have 800,000 concealed carry licensees in this state who I feel like have been vetted and trained and can be trusted to decide what’s best for them whether they carry concealed or open,” said Sen. Craig Estes, R-Wichita Falls, on the Senate floor.

Estes’s bill, SB 17, would modify language that has been a part of Texas law since after the Civil War and allow the open carry of pistols or revolvers in public provided the individual has a state-issued concealed handgun license. Currently, only black powder handguns and long arms may be lawfully carried. Texas is one of just seven states to include Florida and California that prohibit the practice.

Citing law enforcement concerns including a survey from the Texas Police Chief Association that said 207 chiefs of the 285 surveyed were against the open carry of handguns, Senate Democrats voted against the measure Monday after a series of amendments introduced to further tame it were rejected.

“[Police officers] have literally told me that when they pull up they will not know what to do,” said Sen. John Whitmire, D-Houston, as reported by the Daily Texan.

A number of local gun rights groups have been lobbying for reforms to the state’s open carry laws this session with varying degrees of success. While the current bill is forward progress, some lament the fact that it limits open carry to those who elect to obtain a costly permit from the state.

“We have 27 million people in Texas and only 857,000 or so CHL holders,” reads a statement from Open Carry Texas posted to the group’s Facebook page. “That means one of only three things: Texans don’t like guns, 97 percent of Texans are mostly criminals and don’t qualify for a CHL, or Texans don’t like licenses or permission slips from the nanny state to exercise a fundamental right.”

Both gun rights groups and state lawmakers have been encouraged by the state’s new Republican governor, Greg Abbott, who has long promised to approve open carry legislation that makes it to his desk.

Abbott even gave lawmakers a shout out on Twitter the night before Monday’s Senate vote in case they had forgotten where he stood on the issue.

Texas SB 17 is expected to pass a final vote Tuesday at which point it will head to the House.

There, the GOP has an overwhelming 98 to 52 majority which could likely send it to a meeting with Abbott’s aforementioned pen.