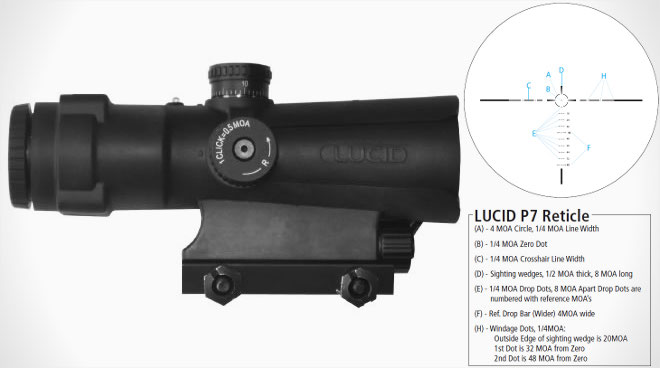 Lucid Optics is about to drop a new fixed four-power scope onto the black rifle market with a different kind of reticle that will appeal to all kinds of shooters, not just the tactical crowd but also target and competition shooters and hunters, the company said in a press release.

The scope, called the P7, is designed for ARs and other rifles with flattop rails and features a reticle with holdovers in MOA that make it useful no matter what caliber or cartridge its host rifle is chambered for, unlike many tactical optics that are calibrated for common AR loads.

The reticle has hashes out to 80 MOA in 8 MOA increments making it useful even at extreme ranges. Lucid calls it “ballistic measuring tape.” All a shooter has to know is what range the holdovers work out to and go on from there. Additionally the P7 can be adjusted for windage and elevation with turrets that adjust in 0.5 MOA increments.

“The P7 4X optic is our new top-of-the-line product offering,” said Lucid’s founder, Jason Wilson, in the announcement. “This optic competes with any other brand on the market today, at a fraction of the cost. At Lucid, we are dedicated to offering mission ready optics that are proven, responsive and affordable.”

The P7’s reticle is illuminated and lights up red when powered and it has 10 brightness settings. It’s powered by a common AA battery which will provide about 2,500 hours of illumination, give or take, depending on usage. The scope has an automatic cut-off to prevent the battery from running down when not in use as well as an automatic brightness sensor that adjusts to ambient light levels without forcing the user to manually adjust the reticle.

While there are red dot sights that can exceed the P7’s 2,500-hour runtime, that’s still competitive with other powered magnified optics, especially when factoring in the price.

Lucid has developed a great reputation for manufacturing not just durable, duty-ready optics, but affordable glass as well. Like their other products the P7 is attractively-priced with an MSRP of just $439. Realistically, in stores it should be available for less than $400.

It’s hard to beat Lucid in terms of bang-to-buck. Their HD7, now in its third generation, has proven capable of taking a beating and will come back and ask for more. The P7 has a similar construction, with a thick rubber molded over the aluminum scope body, and we expect it to hold up to more than a little rough handling.

If anything does happen to P7s in the wild they are still protected by Lucid’s lifetime warranty, which covers everything but loss or deliberate damage to their optics. Lucid also offers a killflash filter for users that require them.