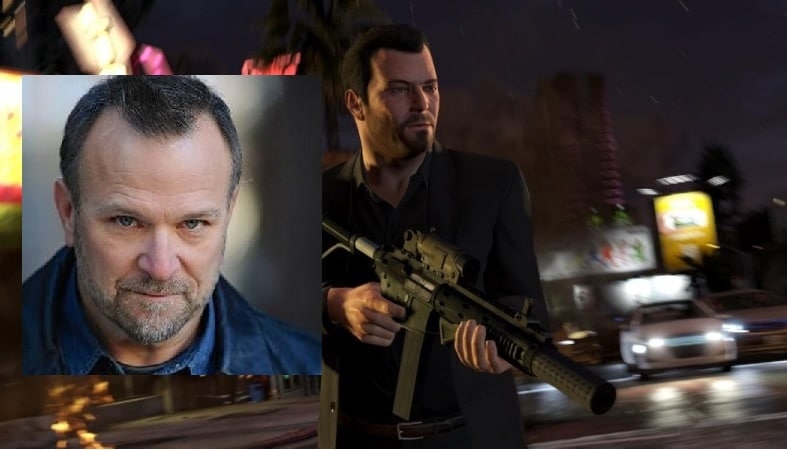 Ned Luke, inset, who recently appeared as a helpful counter attendant in a very anti-gun gun store, is best known for being Michael De Santa in Grand Theft Auto V, who is kind of OK with gun violence.

In an ironic twist, it turns out the counter staff at the faux gun store in Manhattan’s Lower East Side stocked with hidden cameras and illegal guns was none other than Ned Luke, known for his depiction of a hyper violent criminal in the GTA series.

The actor recently appeared in a video released by gun control groups in which he stars as the only salesman at “The Gun Shop” standing in front of a wall of firearms ranging from military surplus SKS rifles to submachine guns. Those interested in items were advised of a tale of gun violence purportedly associated with each firearm up for sale.

Luke, whose IMDB profile lists him with some 28 credits, is likely best known for his portrayal of Michael De Santa in Grand Theft Auto V, an open world, action-adventure video game developed by Rockstar North and published by Rockstar Games.

In contrast to Luke’s latest role in which assailed would-be gun buyers with tales of murder and accidental death tied to the firearms they showed interest in, GTA5 is noted for its sometimes extreme and graphic violence, often at the hands of the fictional De Santa who Luke describes as, “Ward Cleaver meets Scarface.”

The game features more than 50 different weapons systems ranging from Desert Eagle pistols to Dillon Mini Guns which are used for reasons other than sporting purposes but are easy enough for in game thugs to acquire without expanded background checks.

The game itself has been panned both in the U.S. and overseas by some over its portrayal of women to include first person sex with prostitutes, user-playable torture scenes and of course the standard array of bank robberies, murders and heists.

“GTA allows you to tap into everything that you can’t do in real life,” said Luke in a 2013 interview with PC Advisor defending the violence in the game. “In real life, you don’t get to go out and rampage and do all these bad things. Gangster movies have been huge forever–Godfather, Casino, Goodfellas, all the way back to Jimmy Cagney. People lose themselves in the bad boy. And there isn’t anybody badder than the dudes in GTA. That’s why they’re so popular. You get to actually go out and do all these horrible things.”