Groups square off on opposite sides of Iowa gun reform bill 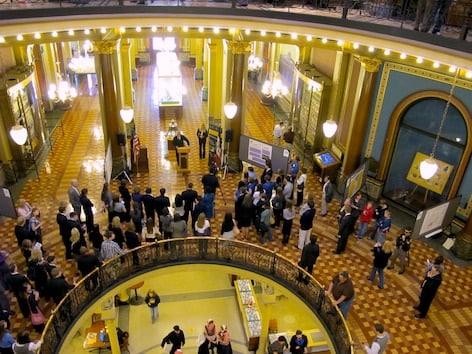 Groups both for and against the omnibus gun reform package in the Iowa Senate are gearing up for a fight. (Photo: Des Moines Register)

Gun rights advocates are fighting back against assertions from Bloomberg-backed organizations that a sweeping omnibus proposal making its way through the Iowa legislature is dangerous.

The legislation sailed through the House by a 75-24 vote last week without debate and aims to protect nearly a quarter million Iowa handgun permit holders from data releases as well allow the state to become the 40th to allow private ownership of otherwise legal sound suppressors.

Now the primary obstacle for the Iowa gun reform bill to see the desk of Gov. Terry Branstad (R) is to gain approval from the 50-seat state Senate with its 26 Democrats and 24 Republicans and gun control advocates are making a stand this week in an effort to derail the legislation in that chamber.

“This bill would allow handgun sales by private sellers without a background check,” reads a statement on the social media page for the Iowa chapter of Moms Demand Action. “We already know how this will turn out — when Missouri passed a similar bill in 2007, their gun murder rate jumped by 23 percent.”

The legislation in question, HF 527 and its Senate companion SF 425 include a host of reforms to the state’s gun laws.

Next, the legislation would repeal the state’s near total ban on National Firearms Act-compliant sound suppressors. As the law stands today, possession of a suppressor is a Class D felony, which is punishable by as much as $7,500 in fines and up to five years in prison. Besides allowing private suppressor ownership, the bill contains shall-certify language making it mandatory for local law enforcement to approve legal paperwork — a key part of the process.

In addition to the privacy and NFA sections of the legislation, the proposal also includes mandates to loosen regulations on youth handgun possession for target shooting and hunting reasons provided they are given the firearm by a parent, instructor, or guardian. Current laws limit this practice to youth 14 and over.

Finally, the measure strengthens straw purchase laws in the state, proposes to allow mandatory gun training to be accomplished online and extended to every 10 years from the current five, and extends the ability of licensed security guards to carry on public school property.

Lobbyist filings for the two bills show that besides the Bloomberg group, a number of healthcare associations to include the American Academy of Pediatrics and Iowa Medical Society are against the measure. To their ranks join religious groups such as the Episcopal Diocese of Iowa and Iowa Annual Conference of The United Methodist Church.

First Amendment advocacy groups such as the Iowa Broadcasters and Newscasters Associations are on file opposing the legislation over concerns that it would place gun permit holder information out of bounds from public and Freedom of Information requests. Currently, anyone can get the name, address and birth date of concealed carry permit holders by a simple process.

Supporting the legislation are the bulk of the state’s law enforcement lobby groups including the Iowa Police Chiefs Association, state Sheriffs’ and Deputies Association and the state Peace Officers Association, as well as gun rights advocates of all forms.

The latter take exception to the claims by those opposed to the reforms currently on the table.

Contending that the Bloomberg groups have delivered misinformation and misrepresentation, both the Iowa Firearms Coalition and the National Rifle Association have come out swinging to push through any attempted barricade to the legislation.

“Everytown for Gun Safety has done a disservice to all Iowans by their commitment to using their vast resources to propagate falsehoods and exploit misconceptions regarding Iowa firearms laws in order to serve their own extremist anti-gun agenda,” reads a statement from the NRA issued earlier this week.

“Instead of supporting the increased penalties for criminals involved in ‘straw purchase’ schemes in HF 527 and SF 425, Everytown and Moms Demand Action chose to spread falsehoods about a strong pro-gun bill in a blatant attempt to halt any and all progress on legislation that would vastly improve the safety of Iowans by bringing much-needed clarity to Iowa firearms code,” contends the NRA.

The legislation is expected to see debate in the Senate in coming weeks.