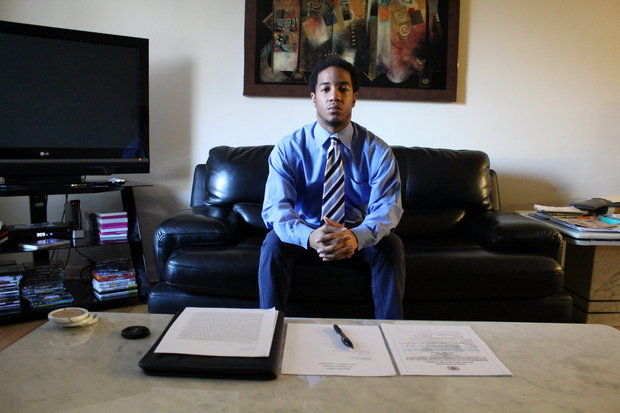 Former armored car guard Steffon Josey-Davis, 24, is seeking to have his record cleared and get on with the rest of his life following what he describes as a mistake.

A 24-year-old man in New Jersey is trying to garner a pardon from Gov. Chris Christie after he made the mistake of leaving his 9mm Smith and Wesson in his glove compartment one day in September 2013.

The man, Steffon Josey-Davis, was a Loomis armored car guard at the time and maintains that, while in the act of unloading his legally owned handgun, his 6-year-old sister interrupted him. After temporarily securing the pistol in his glove compartment to keep it out of sight of the minor, he was later pulled over by Highland Park police for having an expired registration and police discovered the gun.

“I reached for the glove compartment – that’s when I realized,” Josey-Davis told NJ.com.

The next day when Josey-Davis went to claim the gun from police, he was greeted with handcuffs, and then charged with a crime that could earn him 10 years in state prison.

“They handcuffed me and charged me with unlawful possession of a firearm — a second-degree felony,” he told FoxNews.com.

“I almost fainted. My life was ruined — all my hard work went down the drain,” said Josey-Davis, who up until then had a clear criminal record and aspirations of becoming a police officer. He later withdrew his name from the candidates list for the North Brunswick police due to the charge.

A plea bargain agreement in February led to the gun owner accepting one year’s probation to a lesser charge but, as a felon, he is unable to secure employment but has the backing of Second Amendment advocates and has secured the assistance of attorney Evan Nappen.

Both Allen, a Philadelphia mom who faced gun charges after unintentionally breaking the law by carrying her legally-owned handgun into New Jersey last year, and Van Gilder, a 72-year-old found with an antique gun wrapped in a cloth and tucked away in the glove box of his car when he was stopped for a minor traffic violation last November, saw their cases abandoned by county prosecutors after a public outcry.

Josey-Davis has created a Change.org petition to help sway Christie’s pardon and is seeking to pay for his legal defense through crowdsourcing.

Officials for the Middlesex County Prosecutor’s Office, who pursued charges against Josey-Davis maintain that the gun owner has changed his story on multiple occasions, accepted his plea agreement in February, and stand by their case.

“I got scared and I took the probation,” Josey-Davis said, noting that he was upfront with officers when he was stopped. “What criminal do you know would tell an officer, ‘I have a gun on me?’”

However, Second Amendment scholars are unsure of the nature of the Jersey man’s case.

“Any public safety law will occasionally ensnare a sympathetic case like Josey-Davis. At first blush it seems that he’s not the type of criminal the gun laws are supposed to catch,” Adam Winkler, a professor of constitutional law at UCLA, explained to Guns.com Wednesday.

“Yet he failed the standards of the responsible gun owner in two ways. First, he drove with a loaded gun in his car without a license. He says it was unknowingly, but he did know it. He just forgot it.

“Second, he was negligent with the storage of a loaded gun. He stored the gun in his glove compartment and then forgot about it. By his own admission, he forgot that he left a loaded gun in his car, a place his family, including his children, frequent,” said Winkler. “He shouldn’t be made the poster child of the innocent gun owner. Americans want to know that gun owners are more responsible with their constitutionally protected firearms.”

Governor Christie’s office has confirmed they have Josey-Davis’s petition, but have not made further comment on its status.