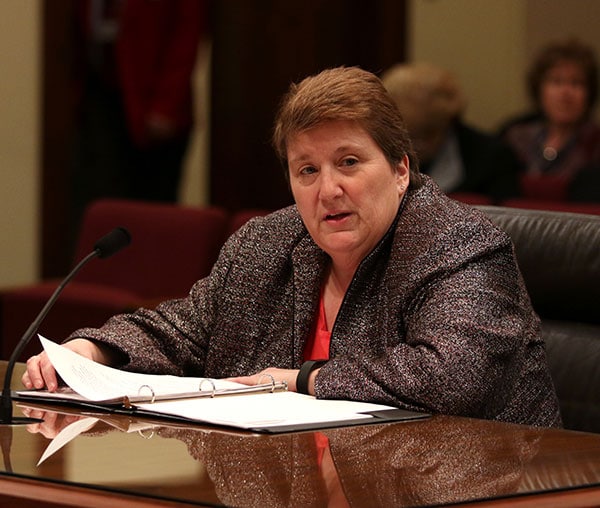 Nebraska state Sen. Laura Ebke is pushing a bill through the legislature that would strike down local gun laws. (Photo: Unicameral Information Office)

Bills introduced into the state legislature could soon prohibit cities and towns in Nebraska from having local firearms laws while allowing concealed carry in restaurants that serve alcohol.

Proposal sponsors argue that by eliminating the current patchwork of gun laws in place across Nebraska and replacing them with the standardized state code on firearms, it will create much-needed uniformity.

“A family leaving their simple Nebraska community in the fall to travel to an event in Lincoln or Omaha should not have to wonder whether a hunting firearm which is transported in their vehicle is in violation of the law of their community of destination or those they travel through,” said Sen. Laura Ebke, the bill’s sponsor to the Legislature’s Judiciary Committee Thursday.

Ebke’s measure, LB 289, would prohibit regulation of guns, ammunition and firearms accessories by cities and villages in Nebraska. This preemption measure would allow those impacted by such a local ordinance found in excess of state law to file a civil suit that would allow them to recover damages, court costs, and attorney’s fees at a 400 percent rate. However, language in the 17-page bill would still allow local communities to enact and enforce prohibitions on firearm discharges.

A separate bill, LB 635, sponsored by Sen. Tommy Garrett would clarify that concealed handgun permit holders may possess firearms in restaurants that serve alcohol. Currently, concealed carry is banned in establishments that derive over one-half of their total income from the sale of liquor.

“LB289 is a direct attack on the local leaders like mayors and police chiefs who are doing everything to protect our families and communities from gun violence,” said Jan Hobbs, with the Nebraska chapter of Moms Demand Action, in a statement. “Even worse, taxpayers would foot the bill for costly lawsuits, as local governments would be forced to pay outrageous fees to the gun lobby’s trial lawyers.”

In testimony delivered against LB 635 Thursday, the Moms group cited a 16-year-old survey where 93 percent of those polled think people should not be allowed to bring guns into bars.

In recent years both preemption bills and those allowing guns in bars have been easy sells in state legislatures from coast to coast.

Last year, Pennsylvania, Kansas and Arizona lawmakers gave their seal of approval on proposals to strip towns of the ability to create local gun policy in excess of state laws. In many cases this led to quick, if reluctant, repeal of overreaching ordinances in an effort to forestall costly lawsuits.

The subject of guns in bars has proven more controversial on its face but were still popular enough to earn the signature of governors in South Carolina, Georgia and Louisiana in 2014

Some states have actually seen a decline in crime since allowing legally owned guns in bars. In Virginia, in the first year where concealed carry holders were allowed in establishments that served alcohol, the number of major crimes involving firearms at bars and restaurants declined by over 5 percent.

The Nebraska Judiciary Committee is expected to take action on both measures in coming days. The 49-seat single chamber legislature is nonpartisan.