A lightweight revolver launched in the wake of a deadly 2012 gang rape in Delhi as a gun for women is not doing so hot among the targeted audience, international media report.

The state-run weapons factory, Ordnance Factories Board, released sales figures for the Nirbheek, which means “fearless” in Hindi, that show just 28 of the roughly 450 orders received so far have been for women. 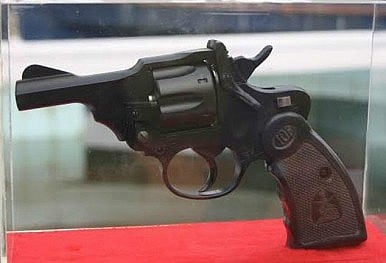 The Nirbheek revolver has a titanium frame, wooden grips and fixed sights. (Photo: The Diplomat)

The Nirbheek is a six-shot revolver chambered for a .32-caliber cartridge (7.65mmx23) and costs roughly $2,000 (U.S. dollars). The design has elements of Webley & Scott and Smith & Wesson revolvers.

The state-run company began production of the gun in January 2014 and named it after the woman — her alias, at least — who was gang raped by six men and later died of her injuries.

In December 2012, the 23-year-old was riding a bus home with a friend when six men on the bus raped her and beat her friend. The woman died nine days later from her injuries, and five of the suspects were sentenced to death by hanging.

A reason for the lukewarm response from women could be that it is not so easy for them to get a license, Field Gun Factory General Manager Rakesh Kumar told Indian media.