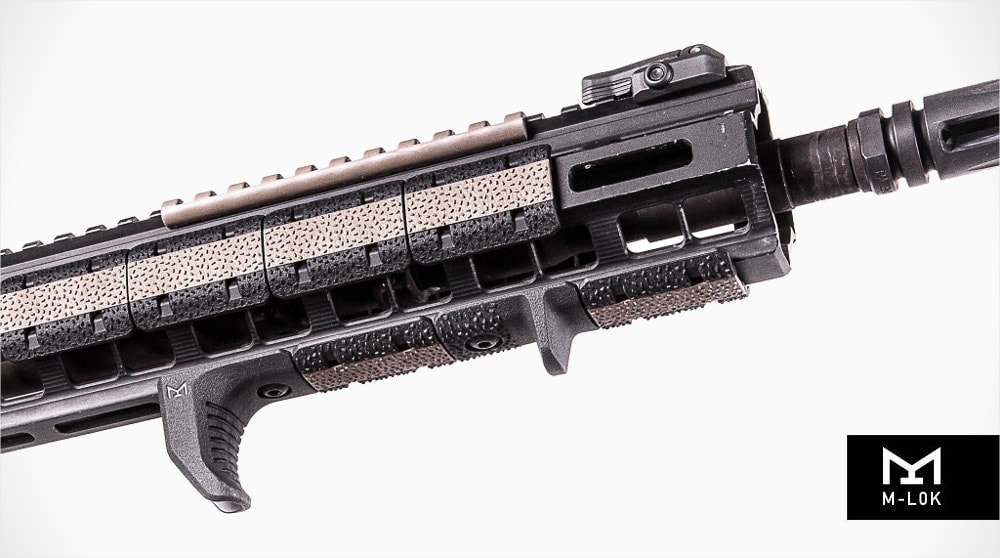 Magpul has been steadily expanding its offerings for the new M-Lok mounting system and things are starting to look pretty serious for tactically-minded shooters with these new accessories, a modular handstop kit and a direct-attach pressure switch mount.

While there have been a few aftermarket options for handstops and grip panels for M-Lok rails this is Magpul’s in-house option with a raised non-slip texture to match their latest MOE grips. The mount for SureFire ST pressure pads is a first, and a nice, low-profile way to install a tape switch without needing Picatinny adapters, which add bulk and raise the switch off the rail.

Both are inexpensive, too, with retail prices set at $14 for the switch mount and $24 for the handstop kit. The switch mount is as flush with the handguard as possible without initially recessing the rail, a great fit for for people looking for a sleek and light package.

The handstop kit is a little more complex with a handstop, raised forward index panel and a rail cover section in between. The kit includes an adapter plate for use with Magpul’s polymer handguards and forends and larger, tubular M-Lok rails.

Magpul’s switch mount is offered in black only while the handstop kit is available in the Magpul’s standard colors, flat dark earth, olive drab green, “stealth” grey and of course, black.

Along with a super-slim, low-profile switch mount for SureFire weaponlights. (Photo: Magpul)

With these latest accessories and kits M-Lok is really filling out as a complete system, whether or not users stick with Magpul updated MOE furniture or opt for aftermarket parts. Although it would be surprising if Magpul didn’t support their own mounting standard, the company has shown a level of dedication to the platform that really makes it shine.

If you’re looking to build or upgrade your hardware you really can’t go wrong with M-Lok today. And if Magpul keeps up, at this rate the accessory options for M-Lok furniture will only get better.

The new mounting standard was launched last year following the introduction of Vltor’s wildly successful KeyMod open-source mounting standard. Both are lightweight mounting systems that use negative space that use less material than Picatinny rails and provide a more comfortable grip surface.

Magpul’s next-generation MOE handguards and accessories use the new M-Lok standard along with many free-floating handguards for popular guns, mainly AR-15 rifles. Magpul has also updated its shotgun forends with M-Lok mounting slots.

Since its introduction the mounting standard has seen a lot of success, with solid market penetration with partners eagerly adopting M-Lok alongside KeyMod and Picatinny mounting systems, with KeyMod and M-Lok becoming the new hotness as far as the black rifle crowd is concerned.