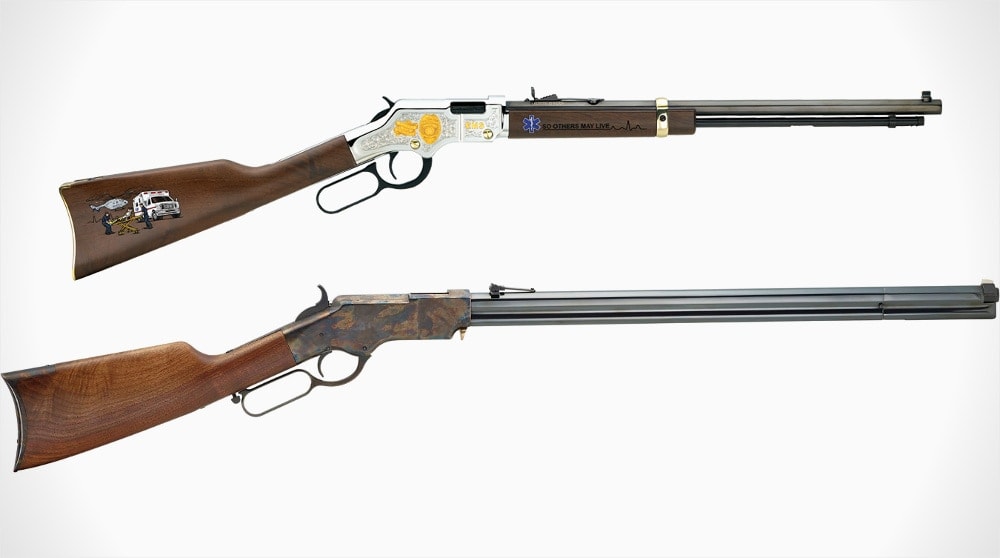 Top, an EMS Tribute Golden boy, and bottom, a New Iron Frame Original Rifle, to be raffled and auctioned off for the NEMSMS and NRA funds, respectively. (Photo: Henry)

The Henry Repeating Arms Company is getting busy this year with several new products now shipping, but they’re also hard at their charity work, contributing to the National Rifle Association and the National EMS Memorial Service, or NEMSMS.

Henry’s auctioning off their New Iron Framed Original Henry Rifle, serial number BTHIF00001, a new case-hardened, steel-framed modern reproduction rifle chambered for .44-40 Winchester, with proceeds benefiting the NRA. Original iron-framed rifles are some of the rarest Henry rifles ever made and these New Iron rifles are a fine tribute to the original 200.

Last year Henry donated a set including the first New Original Henry along with an original Henry rifle made in 1865 to the NRA, for an auction that raised over $100,000 for the NRA Foundation. “Henry continues to raise the bar with a one-of-a-kind donation to the National NRA Foundation Banquet and Auction. This donation of the first produced Henry Iron Frame is just one of many ways Henry has shown support for the Foundation’s fundraising efforts. We are thankful for their generosity,” said NRA director Sarah Engeset.

“Henry Repeating Arms will stay in the foxhole with the NRA to fight alongside them in their battle to protect our Second Amendment rights, promote firearm safety and support youth shooting sports programs,” state Henry president Anthony Imperat. “Our donation of the new Iron Frame Henry serial number 1 is a symbol of our commitment.”

The New Iron Framed original is be auctioned off on Gunbroker. Bidding ends April 12, the last day of the NRA Annual Meeting.

The EMS Tribute rifle has detailed engravings on both sides of the receiver along with a decorative stock. (Photo: Henry)

While the New Iron Original will likely be out of the average shooter’s budget, the company has also donated an EMS Tribute rifle to the EMS Memorial that they are raffling off for $5 a ticket. Tickets are available at the NEMSMS store along with shirts, mugs and swag that goes to help the all-volunteer organization.

Henry has a wide spread of Tribute edition rifles to show support for the military, law enforcement and firefighters just to name a few. The EMS Tribute Rifle is one of the latest to be added late last year.

To find out more about what Henry’s up to check out their Facebook page for regular news and updates.