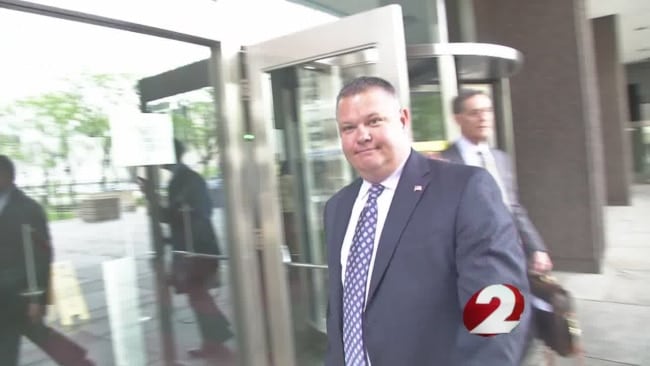 Initially charged with crimes that could have brought him up to 65 years in federal prison, former Ohio sheriff’s Maj. Eric Spicer, found guilty in December of illegal possession of a machine gun, will get 5 years probation.

Late of the Greene County Sheriff’s office, Spicer, 45, was charged last April with using falsified documents to illegally obtain a machine gun from a New York firearms dealer. In all, the U.S. Attorney’s office brought seven charges against the former law enforcement officer, of which a jury in U.S. District Court in December agreed that two should stick.

Federal prosecutors in the case last month sought a 41 to 51 month sentence while the U.S. Probation Office in turn recommended two years behind bars.

In the end, Spicer is receiving considerably less.

U.S. District Judge Michael Barrett handed down a sentence Monday of 100 hours community service, a $1,800 fine, and five years’ probation, the Dayton Daily News reported. In addition, due to his conviction, the former lawman will be classified as a prohibited possessor, stripping his rights to have firearms.

Barrett noted that Spicer’s version of the events in the case were plausible.

“I’m not happy about the conviction for Eric, but Judge Barrett has seen what this really is about and his comments up there are telling,” said one of Spicer’s attorneys, John D. Smith. “This is Eric falling through the (administrative or bureaucratic) cracks and me scratching my head why somebody like the ATF (Bureau of Alcohol Tobacco, Firearms and Explosives) and the U.S. Attorney really care about somebody that falls through the cracks.”

Spicer allegedly forged his boss’s name on ATF forms to acquire the Heckler & Koch select-fire 5.56mm rifle for $1,684.80 in November 2009, using personal funds. Under the 1986 Hughes Amendment, personal possession of full-auto firearms made after that year is largely forbidden with exceptions made for dealers and law enforcement agencies.

However, some 22 days after his termination by the agency, and while no longer employed as a law enforcement officer, federal agents searched his home and seized the illegal machine gun leading to a trial in U.S. District Court last December on charges that could have earned him up to 65 years in prison as well as $1.75 million in fines.

The jury eventually found Spicer guilty of knowingly possessing the machine gun and possessing the gun without proper registration. Jurors handed down a not guilty verdict in charges of making a false statement to law enforcement, false statement during purchase of a firearm, knowingly making false entry on application or record, and possession of a firearm in violation of the National Firearms Act.

Assistant U.S. Attorney Dwight Keller declined comment but lodged a protest with the court over Barrett’s deviation from the non-binding guideline range of 27 to 33 months in Spicer’s case.