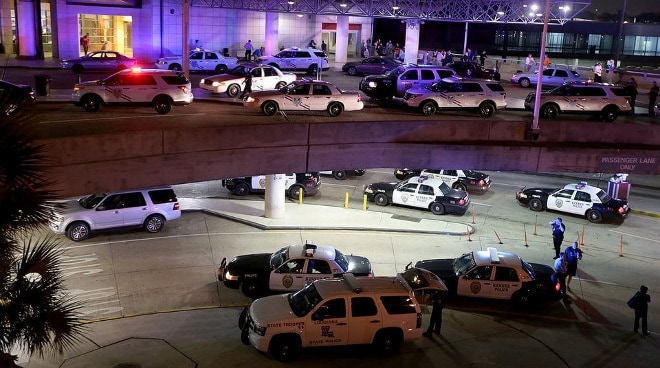 The man, who also brought Molotov cocktails but did not use them, was shot and killed by a sheriff’s deputy. He was identified as Richard White, 63, and reportedly suffered mental health issues. Investigators also found smoke bombs and tanks of oxygen and acetylene in the trunk of his car.

The TSA union thinks that the best way to protect their staff is by adding armed security to their ranks. They’re calling for specially-trained response units to tackle violence targeted at TSOs.

J. David Cox, president of the American Federation of Government Employees defended the proposition, at a press conference. “This man was swinging very hard, very, very hard with the machete and if he would have made contact with anybody it would have been terrible,” he said.

“The employees that do the screening at all the airports now twice have become the victims and become the targets of people that want to do harm,” Cox said. “We have had one of our employees murdered in Los Angeles. We had an attempted murder this Friday in New Orleans. We need law enforcement there that is ready to respond. Sure in New Orleans, the local law enforcement responded to the incident, but we’re talking about 480 airports across the country.”

No one besides White was killed during the attack at the New Orleans airport, but the sheriff said things could have been worse.

“Fortunately, he didn’t seriously injure anybody,” said Sheriff Newell Normand at an earlier conference, adding, “You know, sometimes, the saying,’You’d rather be lucky than good.’ I think we were both last night to the nth degree.”

“I think we did a lot of things right and positive and caused certain things to happen, but by the same token — one second here, one second there — it could have been a much different outcome,” he said.

Critics opposed to armed TSOs point out that the proposition has several major flaws. In addition to increasing the budgetary needs of the TSA, the plan has legal and jurisdictional implications as well.

“Tacking that responsibility onto a TSA officer in addition to all the screening duties, all the duties they have to do at the checkpoint beyond that, I think is a recipe for disaster,” said former TSA assistant administrator Chad Wolf.