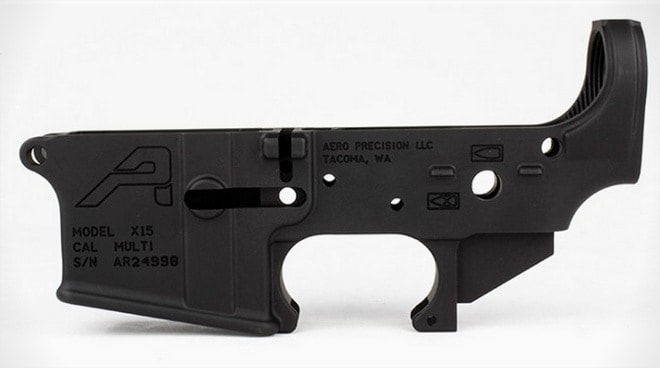 The changes don’t affect the straighforward looks of these lower receiver, but they add improved function. (Photo: Aero)

Aero Precision is revamping their receiver design with two subtle changes to update their lowers. These Gen 2 changes will be applied to their complete line of lowers, including their ambidextrous, short-throw selector and .308 lowers.

Gen 2 lower receivers have a polymer-tipped tensioning screw threaded into the grip extension that lets users remove any wiggle between the upper and lower receivers. Once set, the grip covers the screw to prevent interference and the polymer tip prevents any marring of the rear takedown pin lug on the upper. This is a nice feature for shooters who find they shoot a little more accurately and predictably when there’s no slop between the receivers, and a welcome touch for gun owners everywhere who are just plain annoyed by it.

The other change to the Gen 2 design is a gently-flared magwell. It’s not an oversized magwell, which mainly appeals to competition shooters, just slightly flared to make rapid reloads a little more reliable. 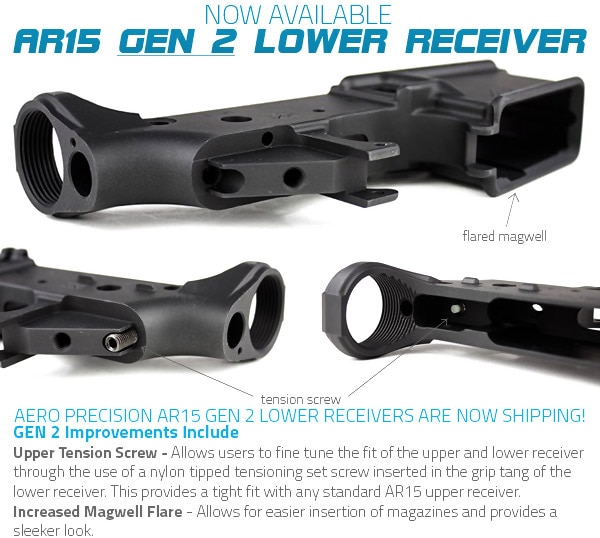 Aero Gen 2 improvements include a flared magwell and a tentioning screw for a custom fit between the upper and lower receivers. (Photo: Aero)

Otherwise they’re everything people have come to expect from Aero as far as lowers are concerned. These changes don’t affect compatibility and these lowers will work with all standard uppers — apart from the improvements they’re essentially MIL-SPEC. They’re machined from 7075-T6 alloy forgings and have a standard 8625 Type III Class 2 hard-anodized finish.

They are mult-caliber marked and have bullet pictograms for safe and fire. The pictograms are on both sides for ambidextrous and left-handed selectors, set at 90 degrees. And like the previous lowers, the rear takedown pin is held in place by a small set screw, so you can swap buffer assemblies without having to worry about losing parts.

As the improved Gen 2 lowers roll out Gen 1 receivers will be phased out and the Gen 2 features will be standard. Aero sells receivers directly through their online store and stripped receivers are priced at $90, which is competitive especially with the handful of nice touches that you get with these lowers.

If you’re not interested in their AR15 lowers but have been looking at their M5 receivers for a bigger bore build Aero’s Brian Deal told us that “.308 Gen 2 lowers are going through the shop as we speak.” The wain won’t be long before they’re available, too.

These upgrades have only bumped the price up by $5 on the regular lowers so you don’t have to worry about sweeping price increases here. Aero is already offering standard and ambidextrous Gen 2 lowers (including blemished ambi lowers for just $125). Right now they’re only carrying stripped lowers with the standard hard-anodized finish but they plan on following up with complete lowers and lowers with Cerakote finishes in flat dark earth and olive drab green.

The company has been on a roll lately introducing new products and expanding their online store on a regular basis. Their parts and rifles have always been top-shelf and it doesn’t hurt that it’s all affordable, too. If you’re building a new black rifle put Aero Precision on your short list and for the patient builder, sign up for their newsletter for daily and weekly deals.