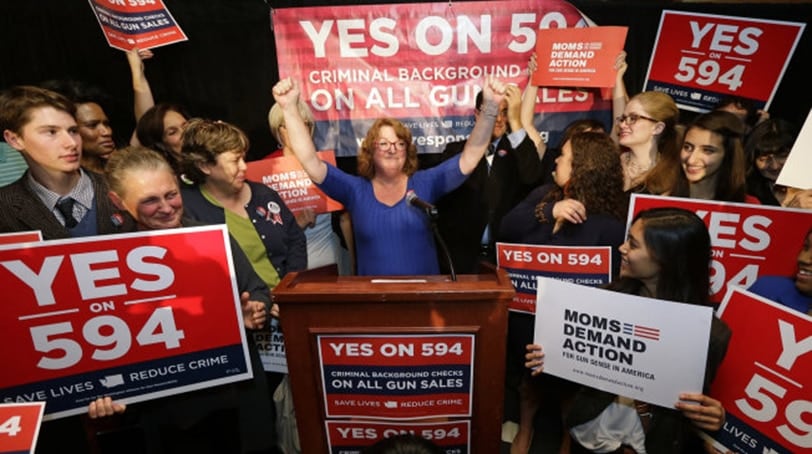 A federal judge in Washington allowed Cheryl Stumbo, center, along with a number of gun control groups that backed I-594 to join a lawsuit brought against the state to derail the new amendment. (Photo: Everytown for Gun Safety)

U.S. District Court Judge Benjamin H. Settle on Monday issued an order to allow a number of gun control groups who backed the controversial I-594 ballot initiative to join a lawsuit against it as defendants.

Granted a motion to intervene is gun control advocate Cheryl Stumbo, as well as the Washington Alliance for Gun Responsibility and the Everytown for Gun Safety Action Fund. All were sponsors in the campaign to have Washington’s expanded background check law, which covers most private gun transfer laws, passed by state voters in a ballot referendum last November.

In December, a number of gun rights groups who opposed 594, to include the Second Amendment Foundation, the Northwest School of Safety and the Firearms Academy of Seattle, filed suit against state Attorney General Bob Ferguson and Washington State Patrol Chief John Batiste to defeat the amendment in court.

Then came pleas from Stumbo and the gun control groups to be added to the case as defendants alongside the state, claiming they had standing.

The court agreed with the gun violence advocates and issued an order to add them to the case Monday.

“The main action in the case is a declaration that the I-594 amendments are unconstitutional both facially and as applied,” wrote Settle, a 2007 nomination by President George W. Bush to the court. “Because the Stumbo parties are citizens and organizations operating in Washington State, the Court finds that they have substantial rights to defend.”

This led to quick rejoicing from the advocates who fought to get into the suit.

“I’m very grateful to the Court for recognizing the unique interest we have in this litigation as the drafters, sponsors, and primary advocates for the passage of Initiative 594,” Stumbo said in a statement emailed to Guns.com. “We are thankful that Judge Settle granted our motion to intervene as defendants in the gun lobby’s meritless lawsuit, and we are eager to join Attorney General Ferguson in defending Washington’s background check law. The Courts must not be a venue to weaken our state’s gun laws only months after the vast majority of voters in our state strengthened them.”

Plaintiffs in the case, who campaigned against the gun control groups being added to the suit, were disappointed to see them added but nonetheless see a silver lining in the ruling.

“The bad part is that the Bloomberg crowd can now run up our cost of litigation,” Alan Gottlieb, founder of the Second Amendment Foundation told Guns.com. “I think the good news is that the judge would not grant the intervention status if he were going to dismiss our suit on standing grounds as the state has filed a motion requesting the court to do. It now looks like we will get our day in court.”

Further, Gottlieb welcomed the inevitable sunshine that Monday’s ruling could bring to the Bloomberg group’s operations in the Evergreen State saying, “In addition it will actually give us an opportunity to seek discovery from them regarding their work on the initiative.”

Second Amendment scholars noted that Settle’s finding was in the end, somewhat poetic.

“As the opinion accurately states, it is a matter on which the District Court has great discretion,” Dave Kopel, an adjunct professor of advanced constitutional law at the University of Denver Sturm College of Law, told Guns.com Tuesday. “In a sense, Bloomberg and his organizations are proper defendants in this case, since it was they and their lies which created the unconstitutional statute in Washington.”