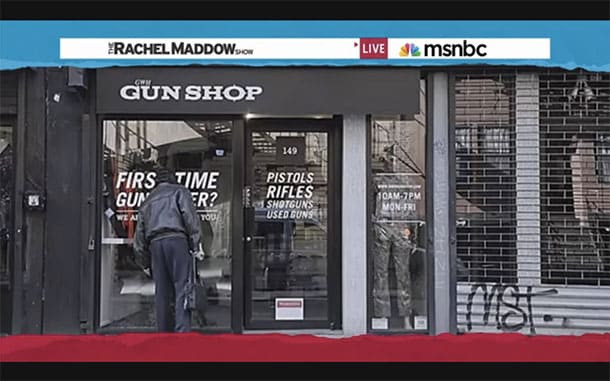 With the number of registered gun owners in America growing under the Obama administration, gun control proponents have figured out a new way to accomplish their agenda: guilt-tripping prospective and existing gun owners before they buy guns. The latest media frenzy about the ad featuring a fake gun store in the heart of Manhattan is the sign of an abrupt strategy change.

In the ad, produced by States United to Prevent Gun Violence, the actor who plays the owner points out the notorious murders that involved each type of weapon in the store, and the customers react with horror. The tags on each gun offer a description of the respective murder and the phrase “Every gun has a history. Let’s not repeat it.”

Afterward, the customers discuss how they were blindsided by the experience, and how it made them decide against purchasing a gun. The ad ends with the words: “Find out if a gun will make your life safer at gunswithhistory.com.”

This misleading ad can have a powerful effect on those who don’t see through its emotional appeal.

Why is this a game changer? Because it distracts the viewer from reason and questions the safety of individual gun ownership as it tears at the heartstrings. Nobody wants to be compared to a psychopathic murderer or a kid who accidentally kills a family member.

As Maddow concluded: “Something like this [ad] aims to change not laws, but individual minds about the wisdom of buying guns.” In other words, it focuses on changing the culture rather than the politics. And we all know that culture is upstream of politics. It’s only a matter of time before the impact trickles down to legislatures across the country.

It doesn’t help our cause that gun rights groups responded the wrong way to this video.

Rather than point out the flaws of their premise—that it’s the guns that kill people—they attacked the method by which producers conveyed their message. The New York State Rifle and Pistol Association (NYSRPA) announced that they are calling for a criminal investigation of the video’s producer for potential violations of state and local laws. But so what if they did? It won’t discredit the video. And if the producers didn’t violate any laws, this strategy will only backfire on the NYSRPA. Either way, gun grabbers will still win the day unless gun rights activists fight back.

Luckily, the gun control lobby makes it easy for us. If guns have such a tragic history and make our lives less safe, why should cops, soldiers, or security guards have guns? Why should the secret service agents have guns? Or, why should anyone own knives? After all, certain knives have a history, too. Knives have been the weapon of choice for many murderers throughout history. Heck, even pillows have been used to kill people on occasion. Are we going to ban those too?

Moreover, is an evil or mentally deranged person going to think about the tragedies that a certain type of gun inflicted before they buy guns? Is disarming people with a conscience really going to stop gun violence?

It is all part of a concerted effort to undermine the argument that guns are necessary for safety. By pointing to the “history” of guns rather than the people who shoot them, the producers of this ad are able to make a powerful, albeit flawed, case for gun control.

Gun rights activists need to fight fire with fire. Just like the producers of this ad, we need to tell a story. Facts aren’t enough, and statistics hardly ever hold a candle to the emotional testimony of a few. The American people deserve the truth, and this viral video cannot have the last word.