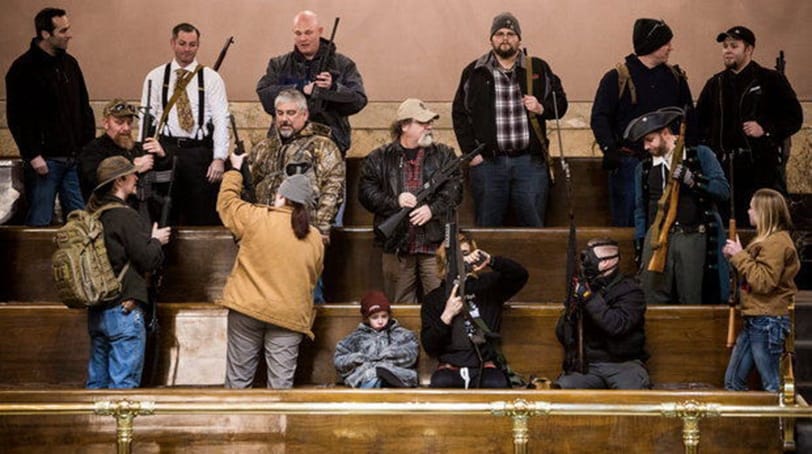 Gun-rights protesters carried firearms into the Washington Capitol during a protest against a new voter-approved law expanding background checks on gun purchases. Oregon lawmakers this session will consider a similar bill. (Photo: The Associated Press)

In a state where background checks are required for the purchase of firearms from licensed dealers and at gun shows, Democratic lawmakers in Oregon are seeking to expand those requirements to include private gun purchases.

Introduced in the state Senate on Thursday was SB 941, or the “Oregon Firearms Safety Act,” a bill that would require both parties involved in the transfer of a gun see a federally licensed gun dealer either in person or on the Internet, Oregon Live reported.

The bill offers exemptions for family members, law enforcement and inherited guns and requires the Department of State Police notify local authorities when a person fails a criminal background check and is not allowed to possess a firearm.

“This bill allows me to give a gun to a first cousin who I may have not seen in 40 years without a background check. But I can’t give it to my best friend,” Kevin Starrett, head of the Oregon Firearms Federation told The Associated Press.

Also included in the bill is a measure to prevent people court-ordered to participate in assisted outpatient treatment – or those with a mental disorder, according to one description – from possessing a firearm during their treatment.

A similar bill was narrowly killed in the Senate earlier this month and in its place another bill introduced would have given judges the power to deny the mentally ill in outpatient programs from purchasing firearms.

Backers of the bill included gun control groups The Brady Campaign and Everytown for Guns Safety, who estimated that some 94.6 percent of Oregonians live within 10 miles of the state’s 1,471 gun dealers.

“Now, since 2000, the Internet has become an online marketplace for guns, where tens of thousands of guns are available to Lord knows who without a background check,” Dan Gross, president of the Brady Campaign, told the AP.