Slide Fire Solutions is cutting prices on their core bump-fire stocks, by as much as $120. Slide Fire has built up a big name in the world of gun gadgets with their stocks that simulate full-auto fire without having to pay thousands of dollars for a registered machine gun.

Slide Fire is dropping prices on their SSAR-15 OGR, SSAR-15 SBS, SSAK-47 XRS, SSAI-MC XAE and SSAI-MC XJC buttstocks, lowering recommended retail prices to as little as $139 for the Saiga stocks, with their AR and AK stocks running between $159 and $199, depending on the model. As always, real-world prices will be even lower.

This represents a pretty huge price drop for these novelty stocks, putting them at a price point that most people can afford, especially when we’re talking about a stock that’s solely purposed for burning through ammo. 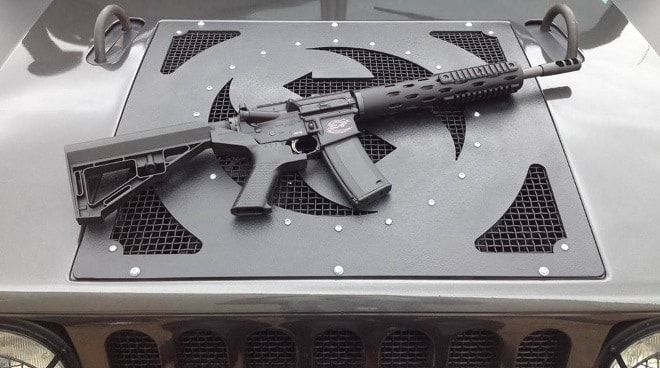 An AR with a Slide Fire stock installed. (Photo: SFS)

The firearms market has gone through some heavy changes in the past few years and the price of ammo has steadily risen throughout. When ammo’s expensive, it’s hard to justify a range toy that’s designed to eat it up. But the new lower price point, people might change their mind.

These lower prices aren’t just for older products, as the SSAR-15 SBS is the newest AR stock introduced earlier this year. The SBS model is an all-new design that not only looks more like a tactical AR stock.

Of all the newly-priced Slide Fire stocks the SBS is the most expensive at $199, while the original OGR model for ARs is priced a little lower at $179.

To use a Slide Fire stock you simply place your finger on the finger extension in front of the trigger. This keeps your finger off the trigger until you push the whole rifle forward with your support hand. The trigger will bump into your trigger finger, fire, and the rifle will recoil back into the stock.

It’s fast and easy to learn and surprisingly controllable and staying on target is a cinch. Because you push the rifle forward recoil is a non-issue, making these a surprisingly fun range toy.

When they were priced between $300 and $400, it was a lot harder to justify picking up a Slide Fire stock, especially since they’re just for fun and not at all practical. With the new price scheme in place, these are going to be a lot more popular.