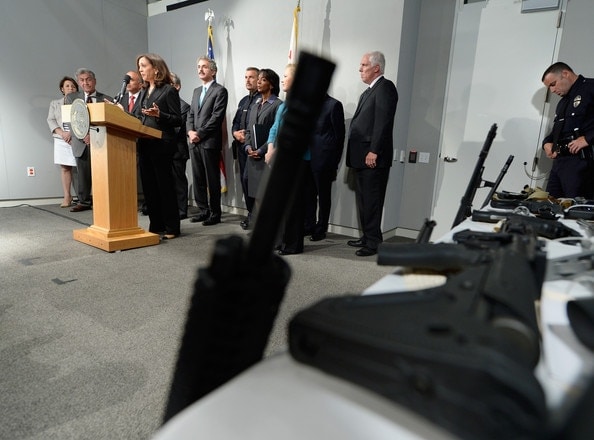 A group of lawmakers is demanding answers from Attorney General Kamala Harris regarding how the Department of Justice has spent a $24 million windfall financed from gun owners that was intended for gun confiscations.

A full dozen state senators, all GOP party members, penned a letter last week to Senate President Pro Tem Kevin de Leon proposing to call the DOJ on the carpet regarding its management of the Armed Prohibited Person System, which uses lists of firearms owners cross-referenced with criminal and mental health records to identify once-legal gun owners who may be in possession of weapons in violation of state law.

The lawmakers cite that a 2013 bill, SB 140, muscled through the legislature with widespread Democrat support that provided $24 million to the DOJ to expand the APPS program was designed to eliminate within a year the massive backlog of over 20,000 persons believed to be armed with 40,670 firearms.

However, instead of erasing the backlog as promised, current information from DOJ states that it has actually grown, with at least 21,249 prohibited persons possessing an estimated 43,832 guns.

“Given the critical public safety implications of this issue, we are requesting that the Senate Rules Committee approve a joint oversight hearing…to review the APPS program and the recent report released by the DOJ outlining its lack of significant progress in clearing the APPS backlog,” reads the letter signed by 12 Republican senators to include Minority Leader Bob Huff and Joel Anderson, vice-chair of the Senate Public Safety Committee.

The senators found fault that the DOJ hired 18 additional agents and spend 40 percent of the funds allocated, but had little to show for its work.

Although financed by a mandatory $19 dealer’s record of sale fee attached to every gun transfer that pumps an estimated $2 million surplus into state coffers in the form of an unauthorized tax, federal courts have upheld the legality of the mandate in recent months.

Founded in 2001, the APPS program is assigned with seizing once legally owned firearms from those who have been adjudicated no longer eligible to own them by the state. This is accomplished by cross-referencing five databases to find people who legally purchased firearms since 1996 who are now believed prohibited from owning them. Starting their first sweeps by armed agents to confiscate these guns in 2007, the unit has had several high profile mis-steps.

Following that incident, a Bakersfield man expressed disbelief when armed agents came to his door to seize 18 guns when he flagged in the APPS system. The reason for the raid came from a 40-year-old charge for marijuana possession that is no longer listed in the state’s criminal code. After holding his guns for two weeks, agents returned them once the mistake was realized.

These incidents bolster the argument from gun rights groups in the state who claim the DOJ’s database is overly flawed despite recent efforts to legislate its correction, and that legal gun owners are caught up in its outdated dragnet.

“Instead of taking appropriate measures to confirm a bona fide prohibiting condition in a person’s criminal and mental health history, such as acquiring dispositive court records, DOJ and other law enforcement agencies appear to be relying exclusively on the APPS database – a system that the Department knows quite well to be terminally ineffective,” wrote Calguns Foundation president Brandon Combs in a letter last year to Gov. Brown and state lawmakers.

Highlighted in the letter is the assertion by a former special assistant attorney general that the database is missing at least 7.7 million of the 16.4 million arrest records for the past decade alone.

With recent changes to California’s penal code that allow many former felony convictions to be reclassified as misdemeanors, and the resulting flood of restoration of gun rights that could bring, the database could be further corrupted.

Still, Combs feels relieved that lawmakers are at least starting to ask hard questions about the APPS program even if the proverbial horse has already escaped the barn.

“While it’s nice to see this issue getting a small amount of legislative attention, it’s probably too little, too late,” Combs told Guns.com Thursday. “I’m pleased to see Senator Anderson and other Republicans finally agree with us on DOJ’s anti-gun policies. Hopefully this means they won’t co-author another outrageous APPS funding bill like SB 140 in the future.”