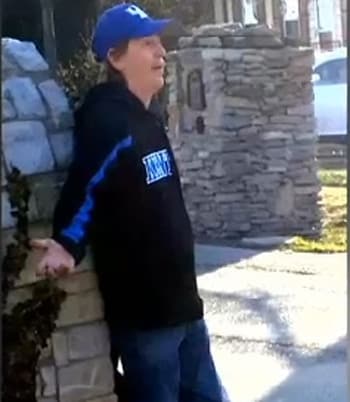 The stranger finally backed off after he was shot in the leg. (Photo: LEX 18)

When a strange man came to take a child playing outside a Frankfort, Kentucky, home Saturday evening, he likely didn’t expect that the kids would put up a fight, giving their grandpa a chance to grab his gun from his truck and eventually shoot the man.

Robert Redmon said his three grandchildren, ages 4, 7 and 8, were playing outside his home when the stranger approached them. According to Redmon, the man was obviously intoxicated and as he made his way up the driveway, he said he was on a mission from God and there to take one of the children.

“I’m thinking the man’s crazy and he’s going to hurt one of my grandkids,” Redmon told LEX 18.

Redmon said that within a second the man had ran 10 or 15 feet, then kicked him, jumped on top of him and began choking him. It was at that point, 7-year-old Teddy and 8-year-old Robert, Jr. sprang into action to help their grandfather. The two children had started taking karate lessons about two months ago, and those lessons proved their worth that evening. Teddy and Robert, Jr. began karate chopping the stranger, giving their grandpa a chance to get free and grab a .45-caliber handgun from his truck.

Redmon explained that he didn’t even have the gun trained on the man, he had it at his side, but the man kept making his way towards Redmon, creeping one single step at a time, and steadily saying, “Shoot me! Shoot me!” When the man got about six feet away, that’s when Redmon said enough and pulled the trigger, shooting him in the leg.

Redmon said he wasn’t out to kill the man, he only wanted to stop him.

After police arrived on the scene, the man, who was later identified as 51-year-old James Reed, was transported to a local hospital for medical treatment, then released later that night.

Authorities said the investigation is still under way and no charges have been filed at this time. The Commonwealth’s Attorney will determine what, if any, charges to file against Reed.

None of the children were injured during the ordeal, and their mother said her father is a hero.
LEX18.com | Continuous News and StormTracker Weather